The mobile horse library spreading love of reading in Indonesia


One man and his horse are on a mission to promote literacy in rural Indonesia, inspiring a new generation of bookworms by taking books door-to-door.Click here to know more. 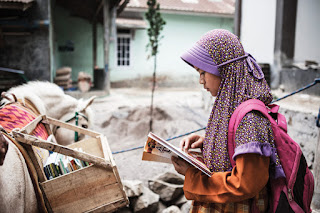 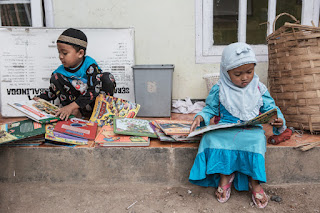 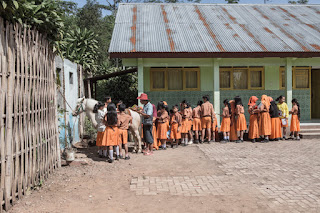 Selecting Books for Your Child

Which is the book for your child?
So, you’re at a book store surrounded by wonderful books. How do you choose a book for your child? A book that your child will enjoy reading and encourage him or her to look forward to more reading. It’s important to remember that reading is not a quantitative activity; rather it’s a personal experience. Children in the same class will have different interests and reading levels, so choose a book that works for your child and not one that ‘every child seems to be reading’. 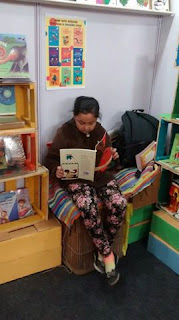 The Five Finger Rule can help you select a book. It is a very simple and basic technique that also encourages your child to choose a book. Here’s how it works:

1.     Choose a book that you think your will enjoy. It’s important to select a book according to your child’s interest. If your child likes animals, then choose a story that revolves around animal.
2.     Read the second page with your child.
3.     Hold up a finger for each word your child is not sure of, or does not know.
4.     If there are five or more words your child does not know, you should choose an easier book.
Besides the Five Finger Rule, there are several ways to choose books wisely. First check online and read reviews. Next speak to the class teacher and gather suggestions and also check with the bookstore for reviews and product information. Importantly, speak to your child and spend time at the book store. This way you will surely pick up a book that you child will enjoy reading, and come back to pick up many more.
Written by Karadi Tales No comments:

Chitra Sounder be visiting a different school every day of the 'WORLD BOOK DAY' in the UK between 29th February to 4th March 2016. Farmer Falgu will surely be visiting a few schools with her. But, would you like to know the genesis of the Farmer Falgu series?

Here is an excerpt for Chitra Soundar's blog. She unravels why she wanted to write about a farmer and her interesting journey so far with Falgu.

When I wrote the first Farmer Falgu story, I had specific goals.
The quiet and noise thought has been rattling around my brain for years and I didn’t figure out how to tell that in a story until I found Falgu.
Falgu didn’t start out to be a Rajasthani farmer. He was a north-Indian farmer simply because I had chosen a Hindi name. I should thank Kanika Nair, the illustrator for giving him a setting, a place of his own and all the joy and colour of Rajasthan.
Like always I put something of myself into every story. Whether it is finding a home in Where is Gola’s Home? Or my Grandma in Balu’s Basket, there is a bit of me in every story. 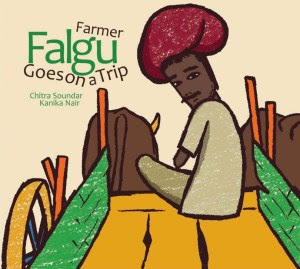 In Falgu, I gave him my courage to plod on in spite of circumstances. He has an unbroken spirit, he is always thankful he’s got a glass, whether it is half-full or half-empty and he’s off somewhere doing something.
The music element of the book came from my desire to be a Karadi Tales author. They were traditionally an audio publisher and I thought musical elements in the story might pique their interest. Cunning of me? Sure!

When Karadi Tales accepted the first title Farmer Falgu Goes on a Trip, it was like a dream come true in many ways. I was a KT author now, Farmer Falgu had a home – not long after he had set out in his trademark bullock-cart as a manuscript.

I grew up hating eggs. But the thought of an omelet always fascinated the chef in me. I can see why an Indian omelet can be a great treat – it’s got all the spices, chillies, tomatoes and onions. I came close to eating an omelet so many times – simply because I liked it as a recipe. Alas, I don’t like eggs. The next best thing – put it in a story.

And so, Farmer Falgu set out to the Market. With eggs. And of course all picture books believe in the power of three. So Falgu had to take with him – white eggs, brown eggs and duck eggs. I researched duck eggs a lot – I didn’t know what colour they were. I realized they come in all sorts of colours. I’m sure Kanika wasn’t too pleased with my egg choices.

Now there are 4 Farmer Falgu stories. The third one is almost ready and the fourth one is still being created by fabulous co-conspirator Kanika Nair. 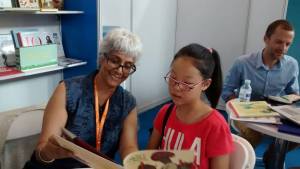 So Farmer Falgu as far as I’m concerned has already gone places, right? From one story to four, from paper to real life, he has come to life for me in so many ways.He is a real person with a twitter account and all. Follow him @FarmerFalgu. But that’s not all. Farmer Falgu captured more hearts at the various trade fairs where my publisher Shobha Viswanath showed him off to lots of people. Her love for Falgu is second only to mine, I’d think. She’d argue it is the other way around. 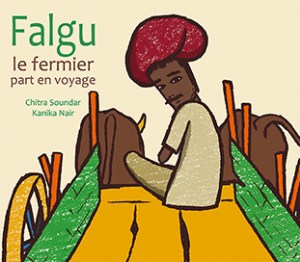 And now Farmer Falgu is in Japan already. He’s called Farga in the Japanese books (thank you Google Translate) and he’s still going places. Et croyez-le ou non , il est là en Europe continentale trop , en France.Maybe I should set a new story in Paris for Farmer Falgu. The power of bullock-carts and his positive spirit has brought him to so many countries.

The kids in Japan and Paris are lucky – they’d have Farmer Falgu in their own languages and can enjoy the stories just like the kids in India do.
And here is a hopeful thought – he might be coming to Germany too. Couple of weeks ago at the Frankfurt Book Fair, I dropped in on Falgu and Shobha at their stand. And lucky me, who was there? The German publisher who wants Farmer Falgu to come to Germany. Fingers crossed, the bullocks would take him across the continent to Germany. 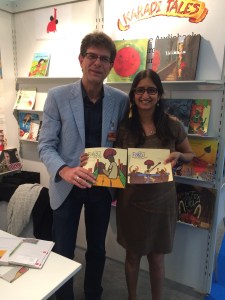 What would he be called in German? Would Farmer Falgu have the same name? Or a different one? Who knows? Whatever he’s called he’d be still Falgu to me and he’d still be the same positive spirit he always is.
To visit Chitra's blog, click here

Last October, the local publishing startup Short Edition launched the prototypes at city hall, the tourism office, and in libraries and social centers - it's a black and orange, rocket-looking cylinder that spits out short stories, free of charge. Locals queuing to return a book or to meet with a councilor are now invited to print and read one of the six hundred original stories provided by the machines. In the first month, about ten thousand stories were printed.  Under a glass panel labelled “Distributeur d’histoires courtes” (“Short-story distributor”), there are three numbered buttons: one, three, and five. The numbers refer to how many minutes a story will take to read.There are currently eight short-story distributors in Grenoble, a city of a hundred and sixty thousand in the French Alps. “The written word isn’t dead,” Christophe Sibieude, the co-founder and head of Short Edition. Now, that's very true!
To read the full article click here. 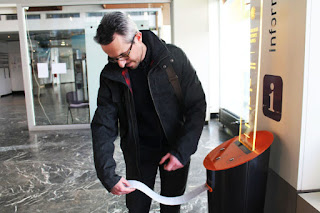