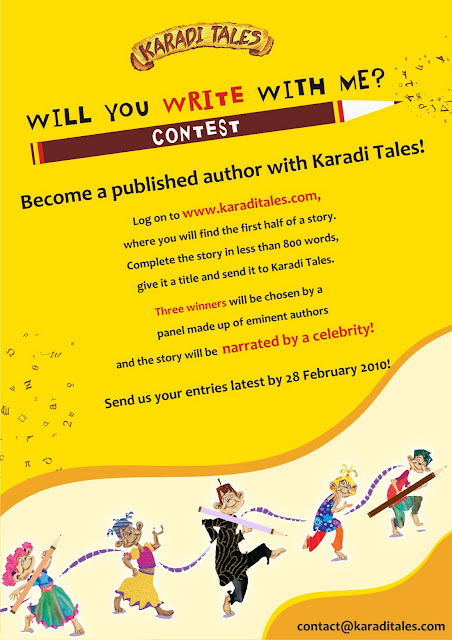 Our newest audiobook title, Super Hathaman, is the exciting story of a yogi who wishes to become superhuman. He travels all the way to Tibet to find out how. Read the book to join Super Hathaman's super journey! You can buy the book at your nearest bookstore - or you can pick it up online here.

Chetan Sharma shows us how to draw Hathaman! 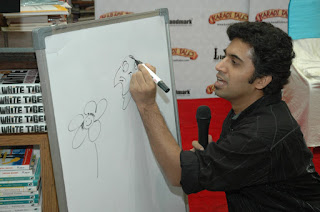 Narayan Parasuram conducts a sing along session with the kids. 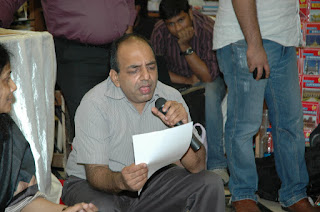 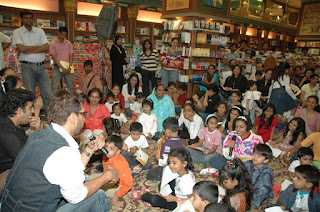 Stay tuned for more events from Karadi Tales and sign up for our newsletter by writing to contact@karaditales.com!

Why we at Karadi Tales love Eric Carle

Kids love him, teachers swear by him and parents are grateful to him. In an era where parents all over the world are terrified of the effects of television violence on their children, Eric Carle is a smart, exciting and wholesome solution.

No, he isn’t a new action hero or a TV star. He’s the man who’s brought the reading habit back into children’s lives. He’s a writer-illustrator who has entered the homes and hearts of children everywhere…

And recently, he’s entered as well in a bilingual effort by Chitra Books, an imprint of Karadi Tales. Four of his titles – The Very Hungry Caterpillar, The Tiny Seed, The Grouchy Ladybug and The Mixed-Up Chameleon. Carle’s text and illustrations have been faithfully retained, with an additional Hindi translation by Sushma Bakshmi. Take a look at the Chitra bilingual Eric Carle books here.

Eric Carle’s best-known work, The Very Hungry Caterpillar, has been translated into more than 45 languages and sold over 25 million copies. His art is distinctive and instantly recognizable. It is created in the collage technique, using hand-painted papers, which he cuts and layers to form bright and cheerful images.

Karadi Tales also publishes The Very Hungry Caterpillar as a tactile picture book - books that you can touch and feel. Information about our tactile books is here.

In his info-video, Eric Carle: Picture Writer, Carle says: 'The unknown often brings fear with it. In my books I try to counteract this fear, to replace it with a positive message. I believe that children are naturally creative and eager to learn. I want to show them that learning is really both fascinating and fun.'

And that’s exactly what he does – his books tell interesting tales within a learning mechanism: they incorporate nature facts – such as how the caterpillar turns into a butterfly or how seeds grow into plants – and inspirational messages – perseverance, politeness and identity. These lessons are subtly reinforced by his wonderful artwork that children keep going back to over and over again. An Eric Carle book is not one that you read and put away – it’s a book that children read and re-read and never forget.

In November 2009, Karadi Tales participated in the Aviva Young Scholar Bookaroo Children's Literature Festival in Delhi.The festival is an effort towards promoting reading, children's literature and Indian publishers for children. Conducted at Sanskriti Kendra Anandgram on Mehrauli Gurgaon Road, the fest saw a number of children's authors, publishers, illustrators and storytellers come together through a series of well-attended events over the last weekend of November.

Karadi Tales was quite busy through it all as well! Anushka Ravishankar, Manasi Subramaniam and C. P. Viswanath performed two interactive readings of Little Vinayak and The Monkeys and the Capseller from the 'Will You Read With Me?' series, following it up with a sing-along session. 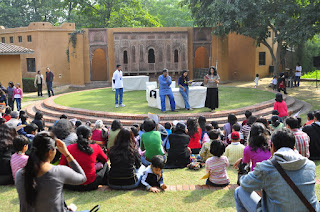 Later, C. P. Viswanath held a sing-along of Karadi Rhymes for very young children. He sang three all-time favourite rhymes - 'My name is Madhavi', 'Train' and 'Mangoes' and had children and parents singing along with him in great excitement. 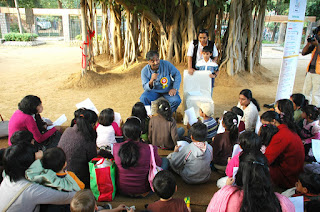 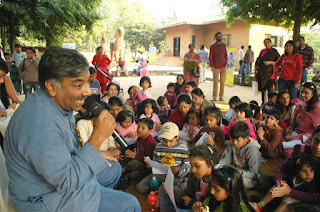 An exhibition of tactile pictures was held through the course of the two days. Dreaming Fingers is an imprint of Karadi Tales that specialises in tactile picture books for the visually impaired. The first title of Dreaming Fingers was the classic Eric Carle title, The Very Hungry Caterpillar. For Bookaroo, this book was presented as an exhibition of pictures for children to touch and feel and see. 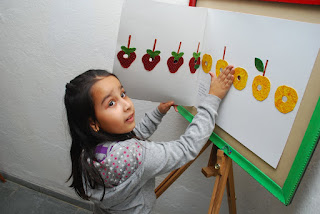 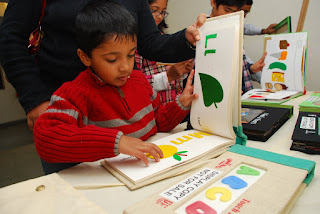 To receive regular information about such Karadi Tales activities, sign up for our newsletter by writing to contact@karaditales.com.

Here are some recent blog-links for you to look at!

Saffron Tree, an amazing blog on books for children, talks about Karadi Tales here. Be sure to check out their other recommendations as well! They review children's literature from a South Asian perspective.

Sujatha, who blogs at Blogpourri, reviews our two most recent titles here. Sujatha's blog contains travel and personal essays, notes about books, movies, politics, society and food, and occasionally features the adventures of her two children.

Diasez, who blogs at Sweet Nothings, writes about our television series on Disney Channel here. She discusses the books her children read and fills her blog with charming personal anecdotes. Do read.

Chetan Sharma, one of Karadi's favourite illustrators, blogs on Chaitanya Atman about our upcoming book launch here. Chetan has illustrated Super Hathaman, the newest title from Karadi Tales. Do pick it up at your nearest bookstore. You can also buy it online here.

And check out the Karadi Tales newsletter here!

Have you ever wondered what exactly an audiobook is? With new media and alternative formats of entertainment flooding the market, it is hardly surprising that people often ask us that question. The best answer we can ever give them is that an audiobook is a book that talks. And it really is just that.

Karadi audiobooks for children come in a package that contains a book and an audio CD. The books are illustrated beautifully by some of the world’s best known children’s artists and the stories are written by India’s finest children’s writers. Narrated by well-known thespians, readers and icons, Karadi audiobooks are vibrant and alive with the melodic background score, music and songs by some of India’s most renowned musicians.

In a nutshell, each Karadi audiobook is a storyteller waiting to be taken home with you – stories, music, artwork and narratives all rolled into one.

How it all began is a charming story too. Karadi Tales was begun in 1998 as the brainchild of Shobha Viswanath, C. P. Viswanath and C. P. Narayan to create a space for Indian culture in the child’s mind and provide meaningful entertainment alternatives for kids and families.

In the 90s, audiobooks were not a known concept in India at all. When the Viswanaths returned to India from the US with their young son in 1994, one of the things that Shobha realised was that there were no audiobooks available at local bookstores.

‘In the US, my son Kaushik grew up with a lot of exposure to audiobooks,’ she says, ‘The Disney classics and Ladybird books came in the audio format and he loved them. In fact, this was one of the factors to which I attributed his early reading. When I returned to India, I went around looking for audiobooks with Indian content – and I couldn’t find any! I was surprised, and we wanted to do something to fill this gap.’

Originally begun as Sky Music India Pvt. Ltd. In 1998, the company was conceived as a music publishing house with a focus on classical and folk music and audiobooks for children. But as the audiobook brand grew larger and larger and Karadi became a household name among Indians and non-residents, Sky Music became Karadi Tales, India’s first publisher of audiobooks. ‘Since then, there’s been no looking back!’ laughs Shobha.

What is really interesting is how different these audiobooks are from the audiobooks that can be found in most parts of the world. Audiobooks of the world tend to lack music and readers of audiobooks are known for their straightforward, emotionless narration. But we Indians are so rooted in traditions of music, dance and drama that it is hardly surprising that Karadi audiobooks come alive with a lilting and richly Indian background score and the theatrical and emotive narration of Karadi narrators.

As for the name Karadi Tales… if you play around with the letters a bit, the words anagrammatise to ‘Read As I Talk…’ And that’s really what Karadi audiobooks do!

Once upon a time, there was a bear...

In 1998, a young group of educationalists and musicians decided to recreate the joy of Indian stories for children through the medium of 'talking books' (or audiobooks). The creators saw the need for audiobooks not as a niche market, but as a product of mass appeal. Thus, Karadi Tales was born.

But who is Karadi? And why Karadi? Karadi is a wise old bear from India. ‘When we started to think of audiobooks, we realised that we needed a narrator,’ says Shobha Viswanath, publishing director. ‘We needed a reliable, trustworthy character to tell stories to children. And as I read through the Panchatantra, the Jataka and other folklore, I realised that the bear was missing. There seemed to be no stories about bears! I found this very strange, since the bear is such an Indian animal. We decided to let a bear be the storyteller of Karadi Tales.’

And why is he called Karadi? Well, Karadi means bear in Tamil. The creators felt that there was a definite need to move away from ‘Bhalu the bear’ and have a Southern touch to storytelling. And thus, Karadi was christened.


So who is Karadi? He’s a born storyteller who’d love to enter your home and tell your child stories.

Welcome to our new blog - or Karadi's cave as we like to call it. Here's where we hope to bring you news from Karadi Tales. We have been up to quite a lot this year and we'd love to share it all with you. We'd like to bring you updates from the editorial desk, news about upcoming books, insights into children's literature and notes from our authors, illustrators and narrators. We'll also keep you posted about events and contests and other things that have been happening.

In short, we love books and we're going to keep talking about them!

Take a look at our latest newsletter here. And here's a quick New Year message from us to you!