Monkeying Under the Jackfruit Tree

Our storyteller, Shobana Jayaraman wore many, many hats and entertained a bunch of kids at Namma Cafe, Mylapore yesterday. The kids laughed, danced, sang and monkeyed around, as Shobana narrated the story of The Monkeys and the Capseller. Have a look at some of the pictures from the event. 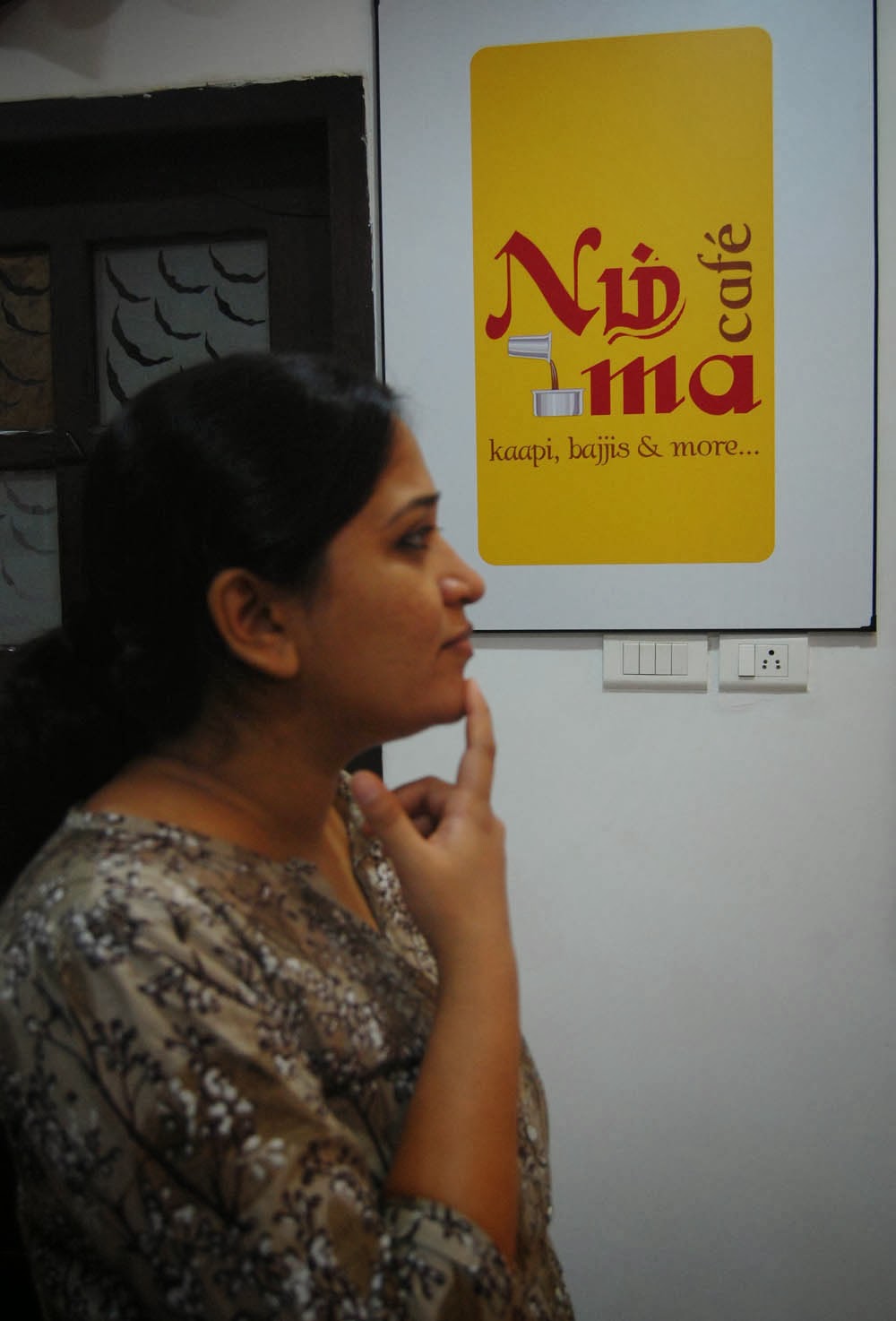 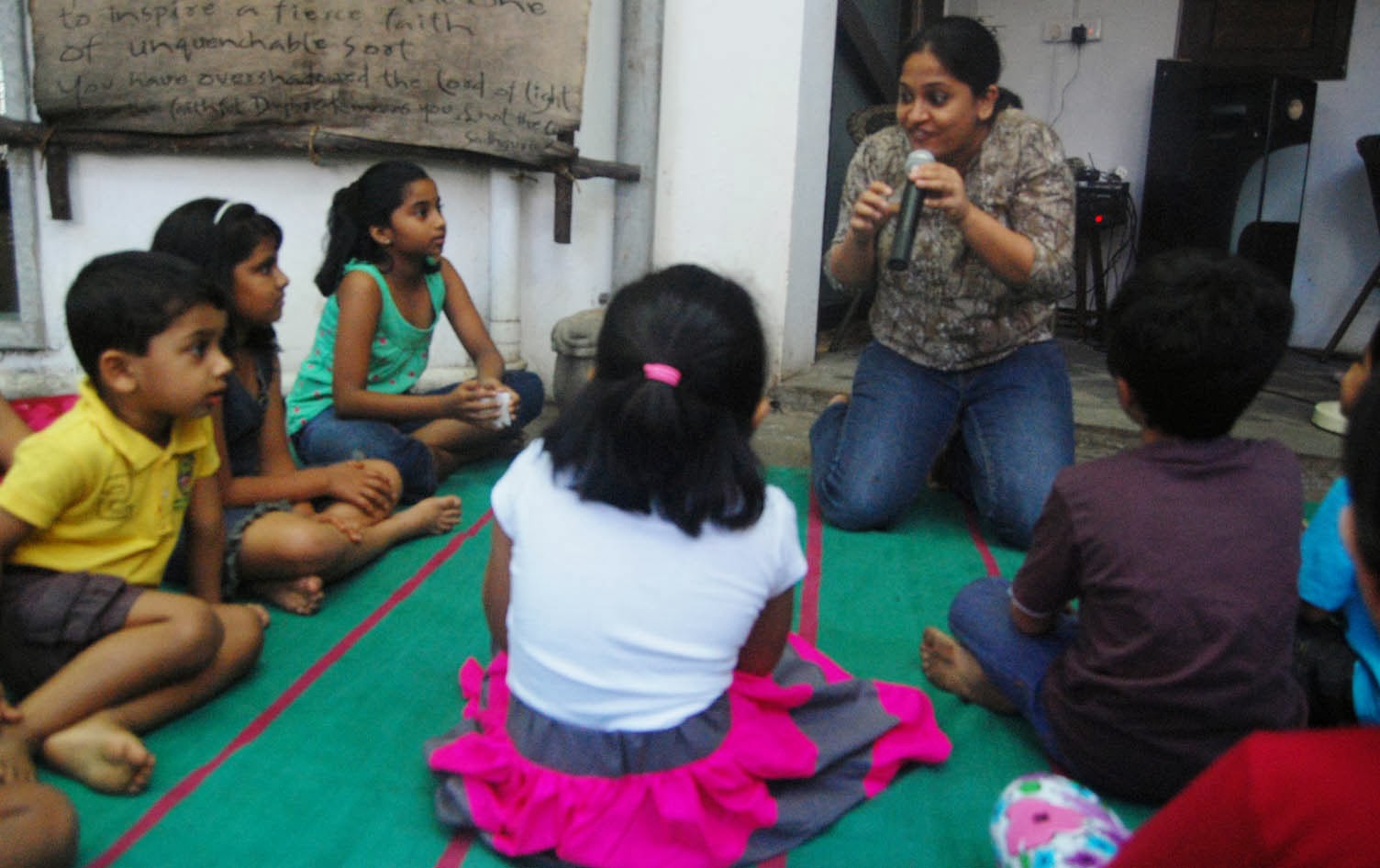 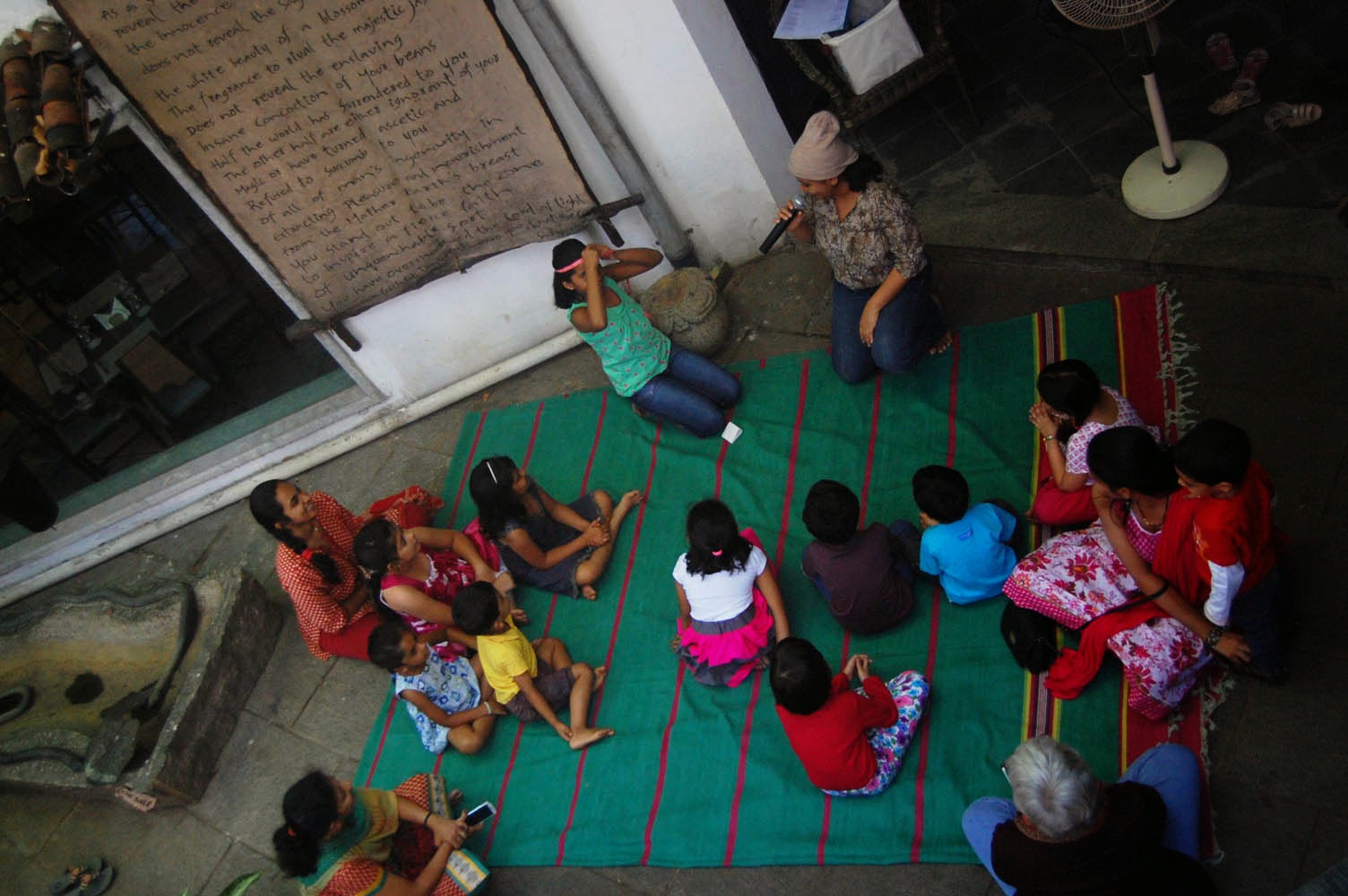 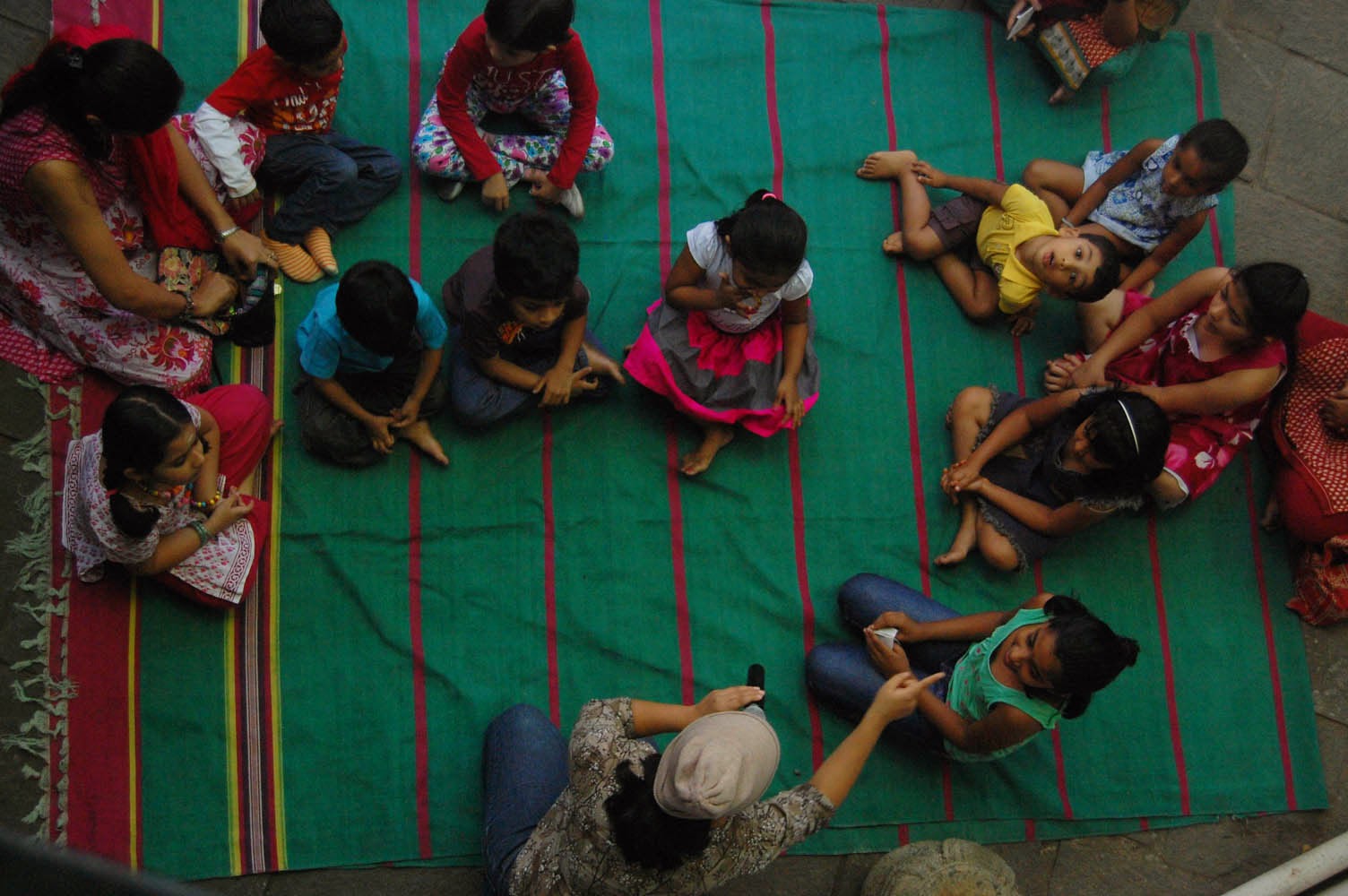 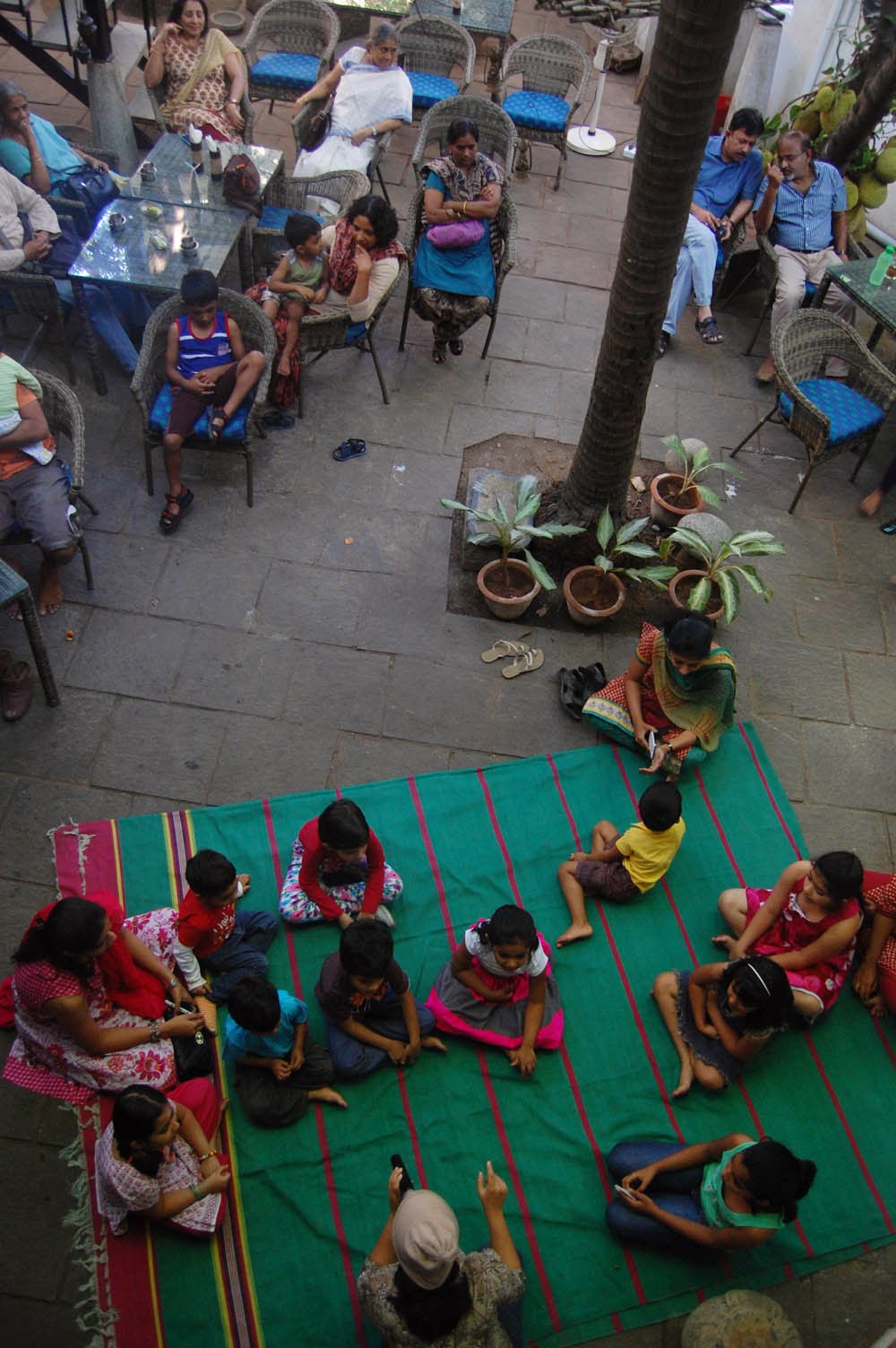 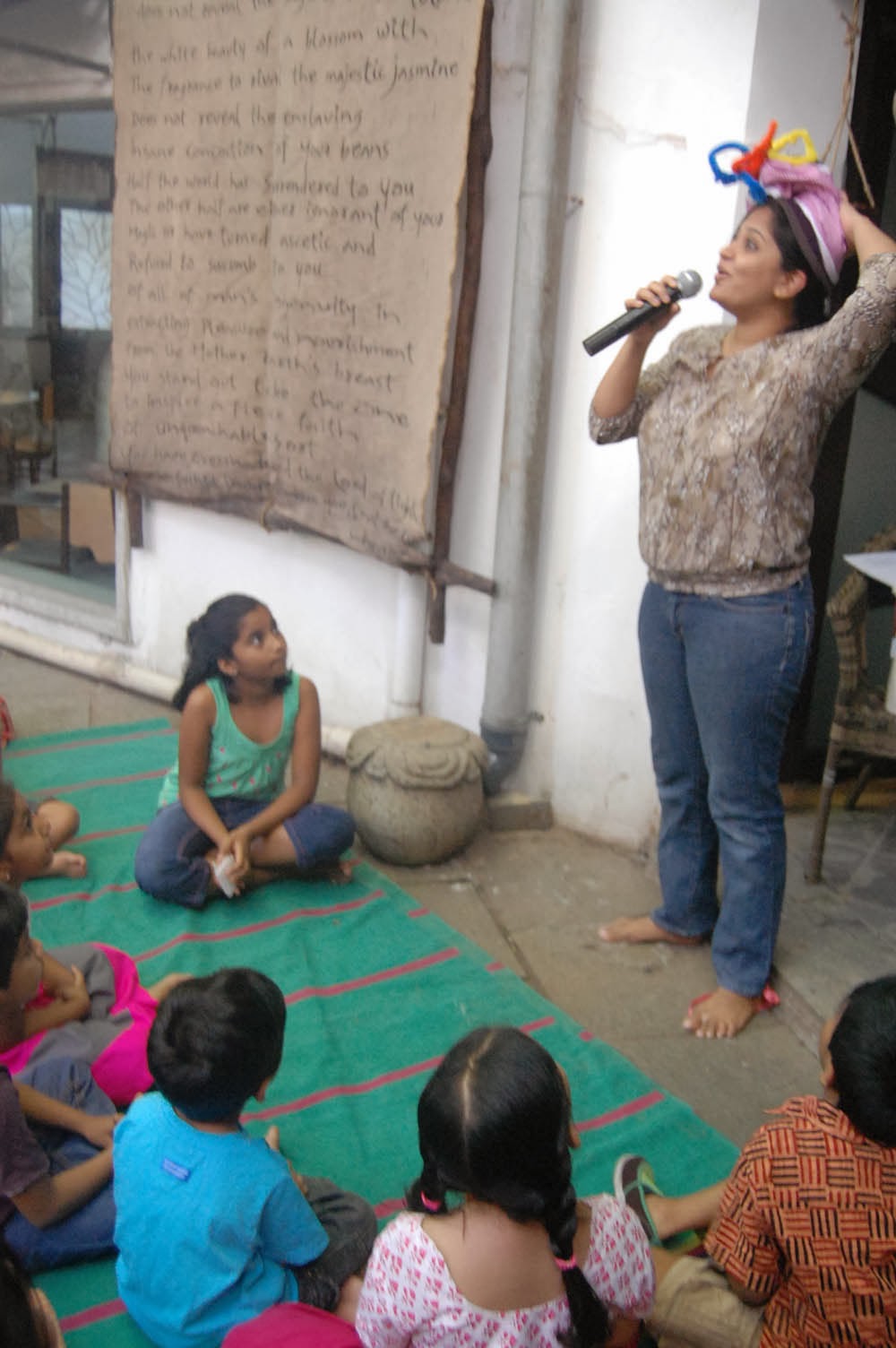 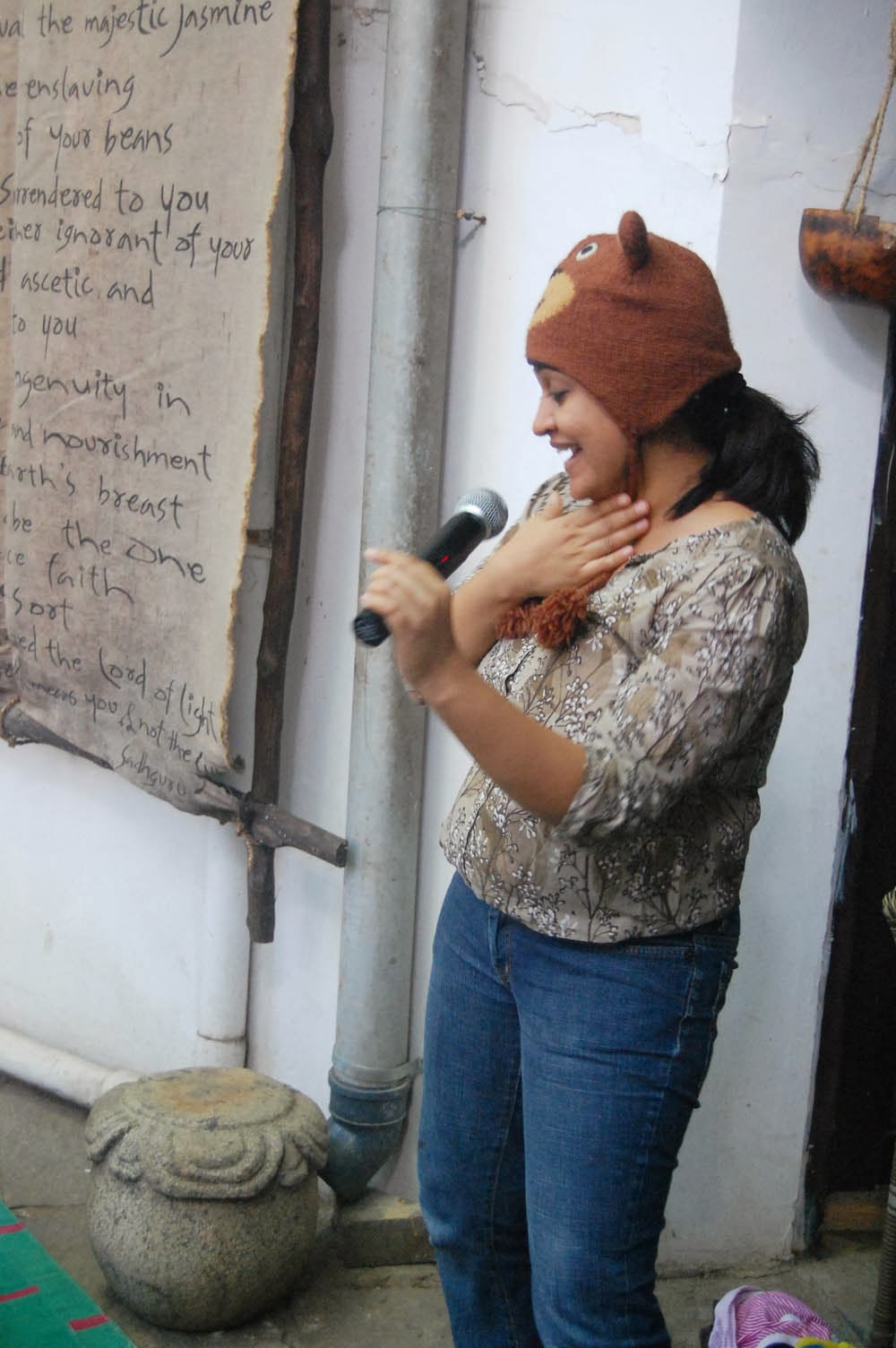 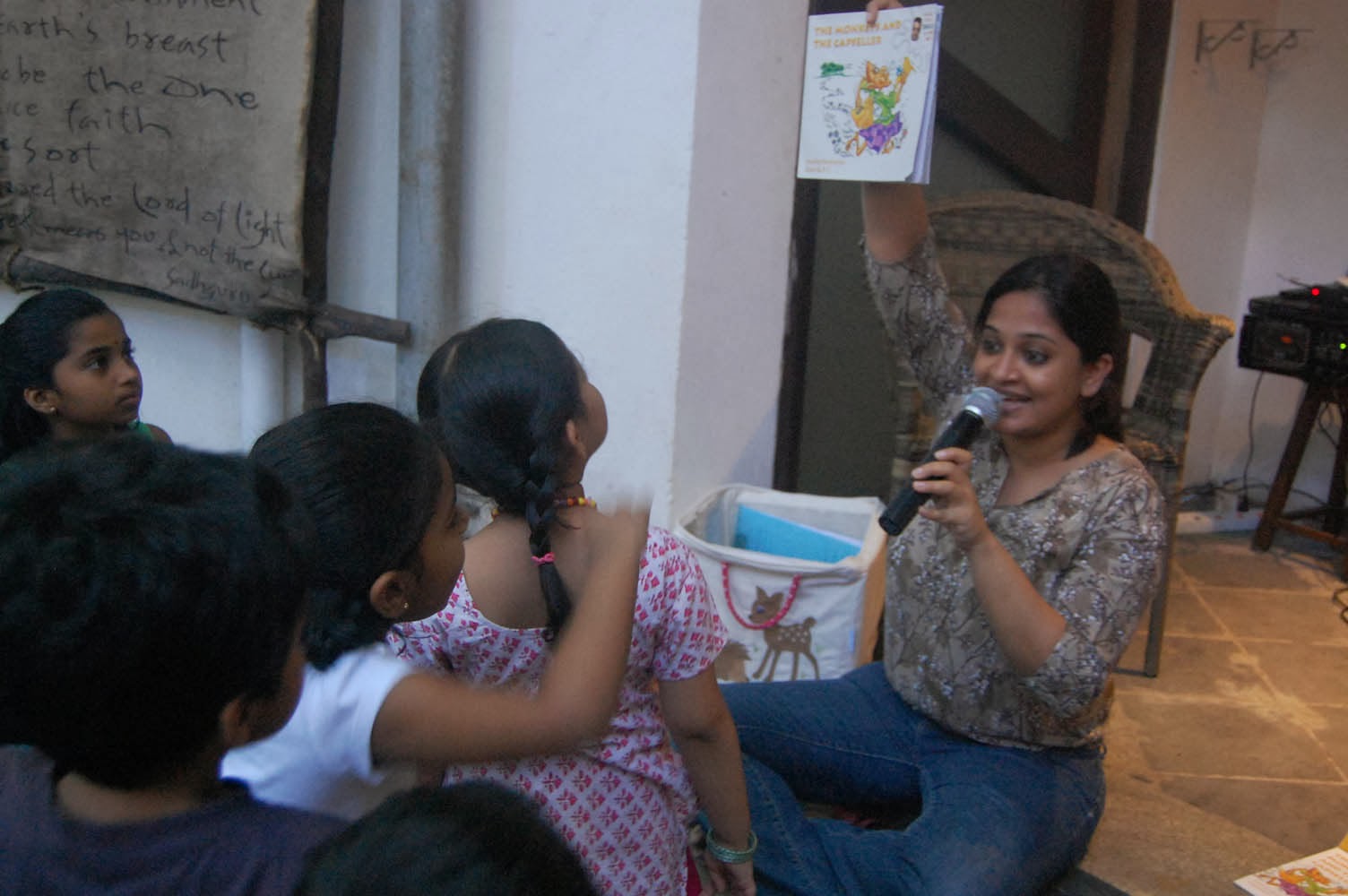 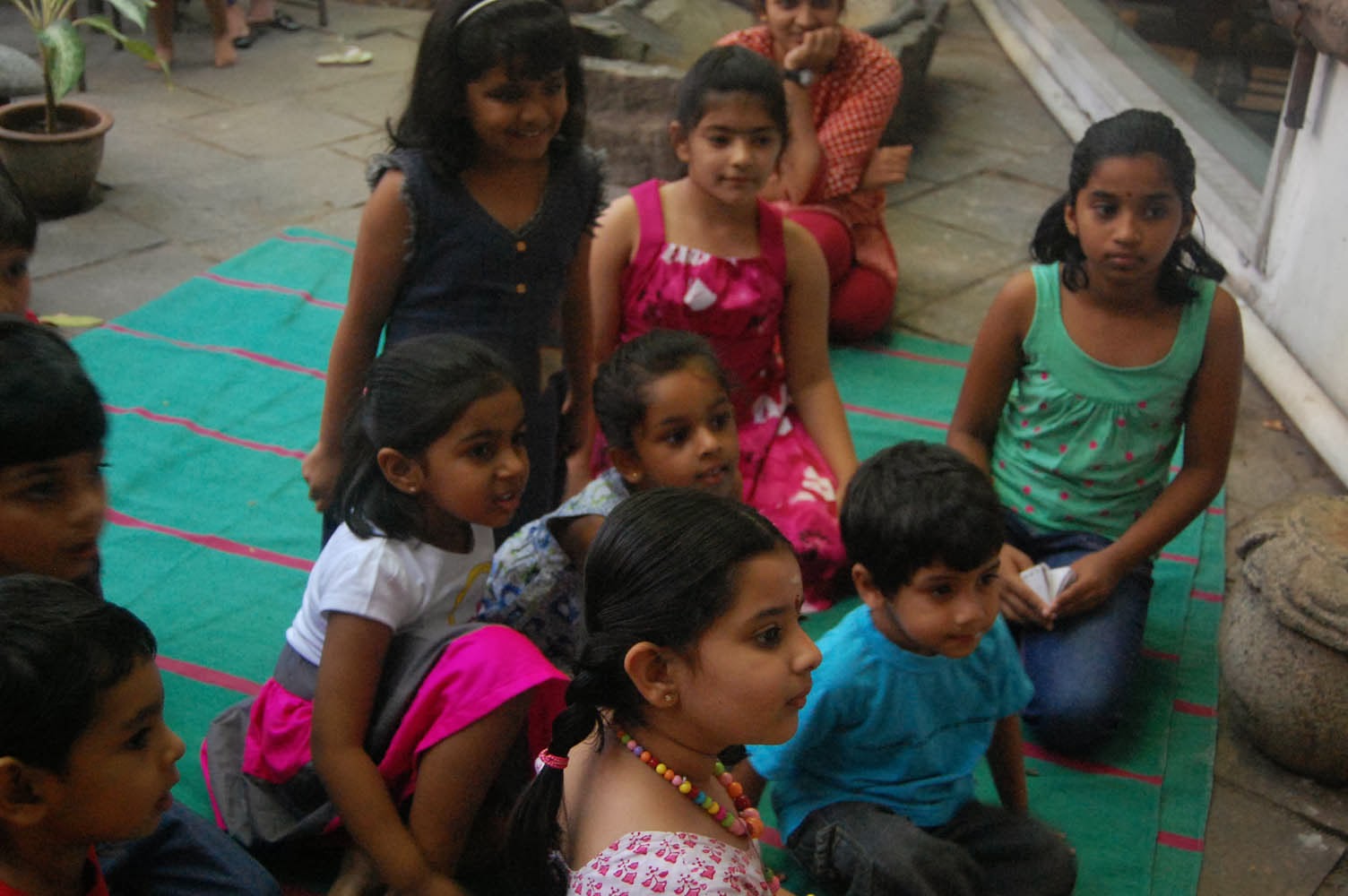 Email ThisBlogThis!Share to TwitterShare to FacebookShare to Pinterest
Labels: Storytelling sessions, The Monkeys and the Capseller

The Blue Jackal Goes to Spain

Our friends from Narval Editorial, Spain have brought out the Spanish edition of one of our most popular books, The Blue Jackal. Here are some pictures of the lovely El Chacal Azul! 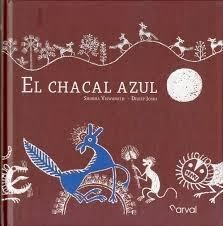 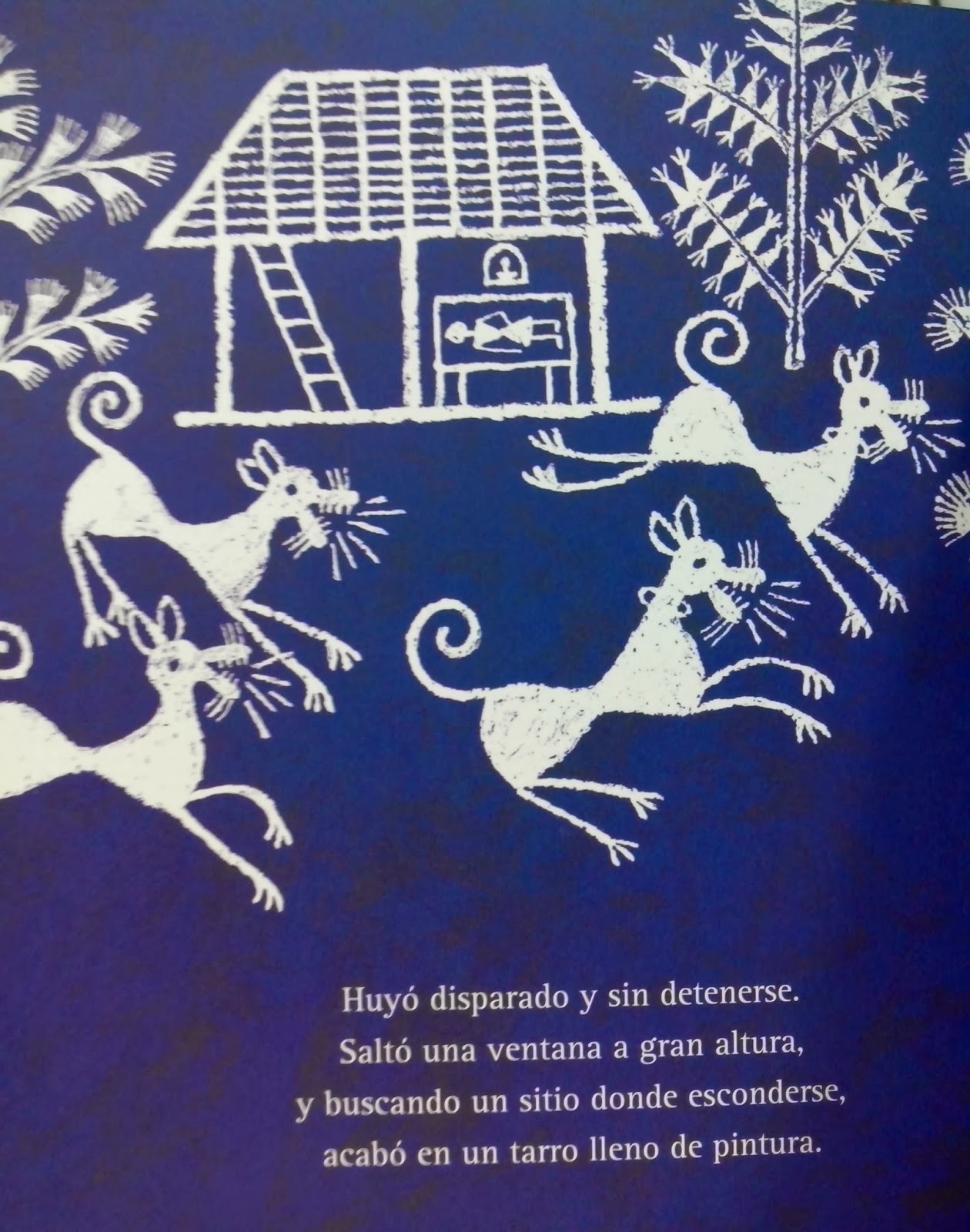 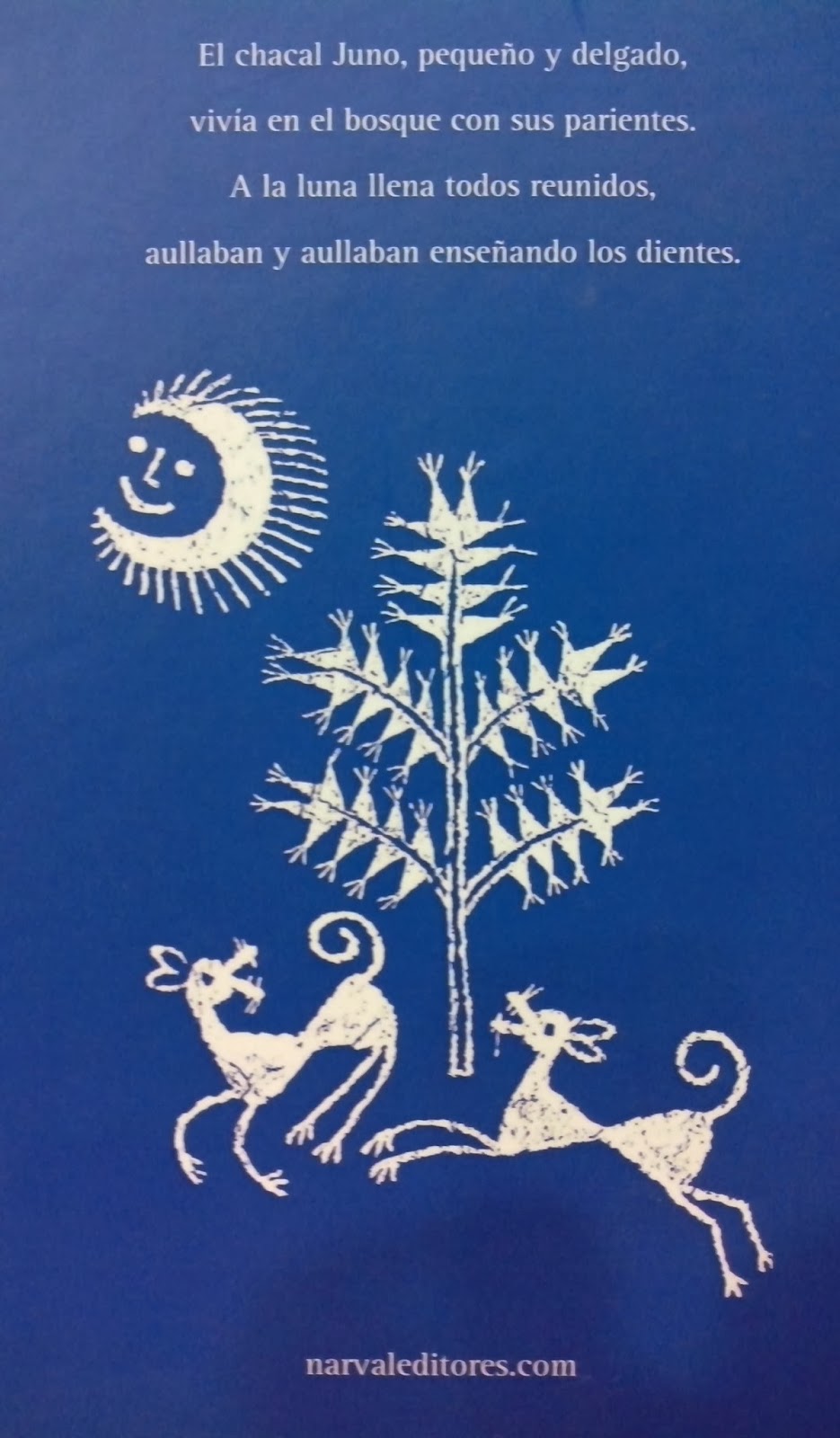 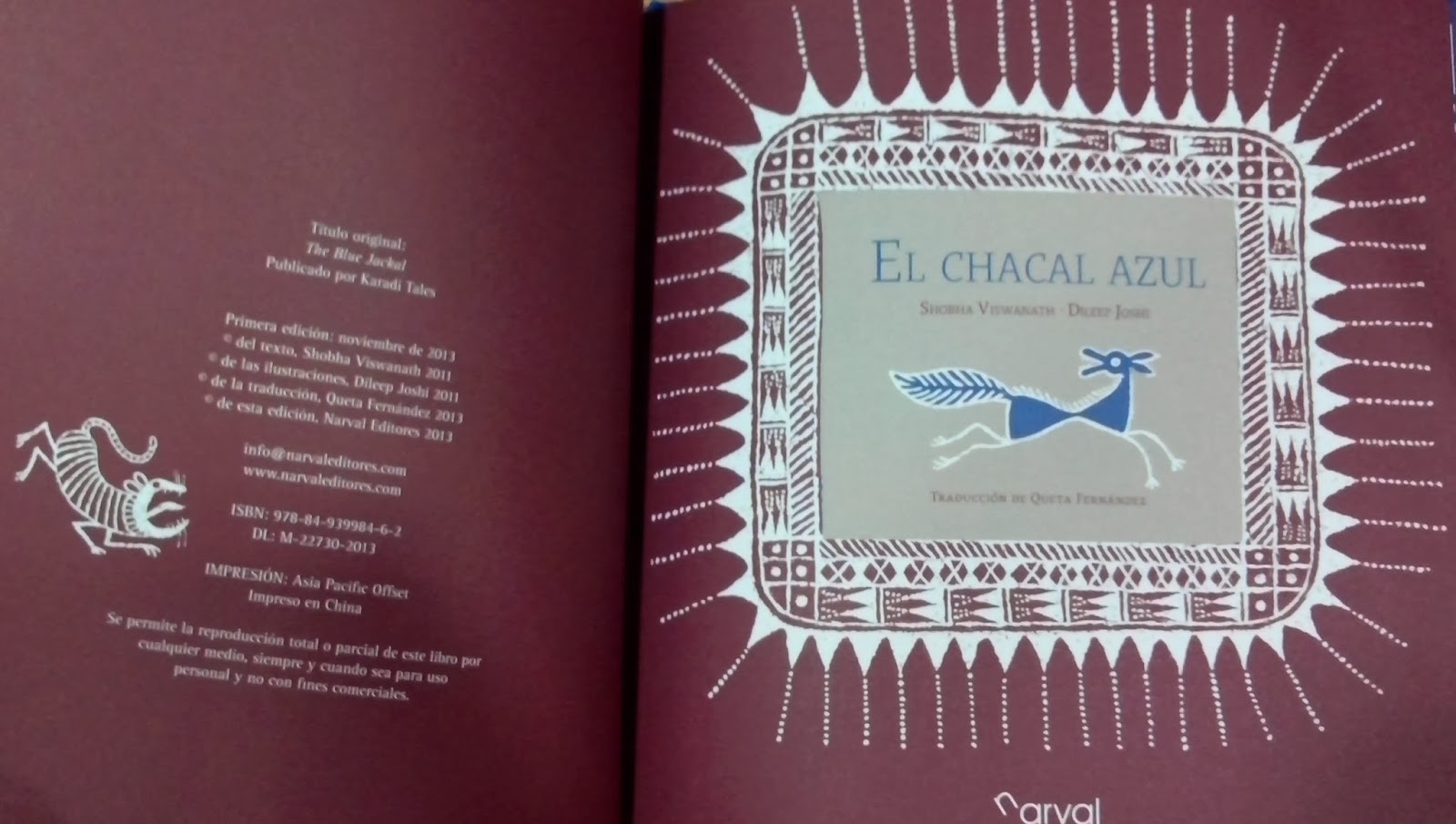 A Black Horse, a Burly Bear, an Elephant and a Mahout

Last week, we launched one of our brand new titles - A Pair of Twins - at the Kala Ghoda Arts Festival in the presence of the author, Kavitha Mandana; the illustrator, Nayantara Surendranath and our Creative Director, Narayan Parasuram. When we asked Kavitha to tell us all about the event, here's what she had to say:
I was full of anticipation before leaving to Mumbai for the launch of ‘A Pair of Twins’ at the Kala Ghoda festival, but I was brought back to earth by my daughter. She wanted veto rights on what I was going to wear. “It has to be ‘authorly’, Ma,” she said patiently. Her tone suggested that I could not be trusted regarding this important matter! Even my footwear was inspected for ‘authorliness’.
When I reached Mumbai, Nayantara, the very illustrator who has poured brilliant colour into the story, casually mentioned over the phone that she’d be wearing a white sari. White? I was flummoxed. Luckily Nayantara had her sister accompanying her. She vetoed Nayantara's choice and draped her in all the colours of the book…thank goodness.

But we weren’t done with wardrobe issues. At Kitab Khana, we ran into a strange problem...an approved outfit, but nobody to wear it. Narayan looked a bit worried as the person supposed to wear the Karadi costume, hadn’t turned up. Eventually, Narayan gamely stepped in, and played the bear.

By this time, we had a room full of kids with a smattering of mums. 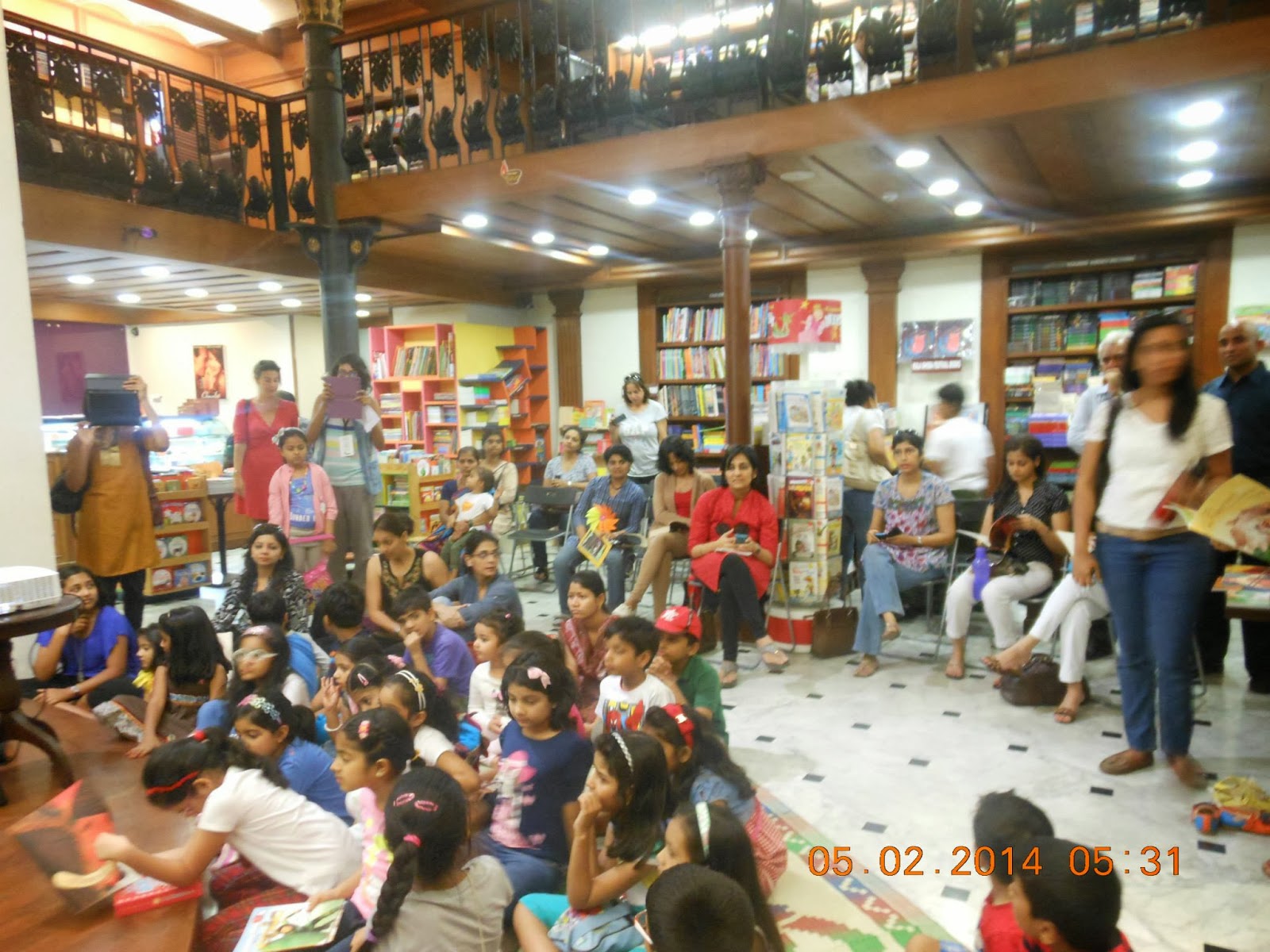 Nayantara had made a ‘Punch ‘n’ Judy’ kind of frame, which was placed on stage. We planned to invite kids to dress up as characters from the book, after the reading. Nayantara also carried a bag of props that she’d made – an elephant trunk, a pair of woollen plaits, a crown, etc. 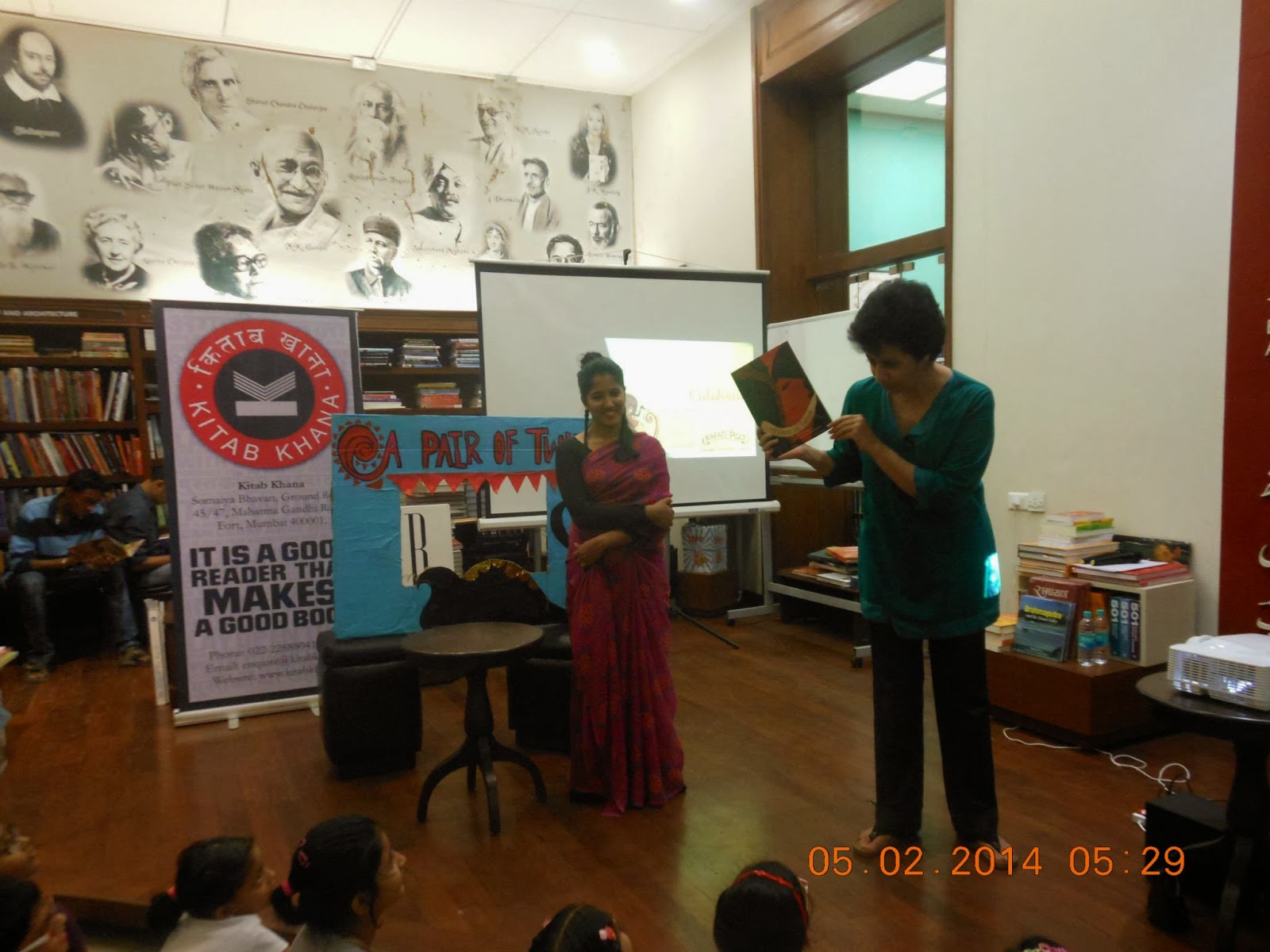 Karadi the bear was supposed to officially launch the book by unwrapping it, but Narayan could barely see. (I suspect, he’d worn the costume front-side back!) So to prevent our first copy of ‘A Pair of Twins’ from being mauled by a sort of blind-folded bear, a little girl from the audience was invited up to unwrap the book. And then we were off into a full fledged reading. 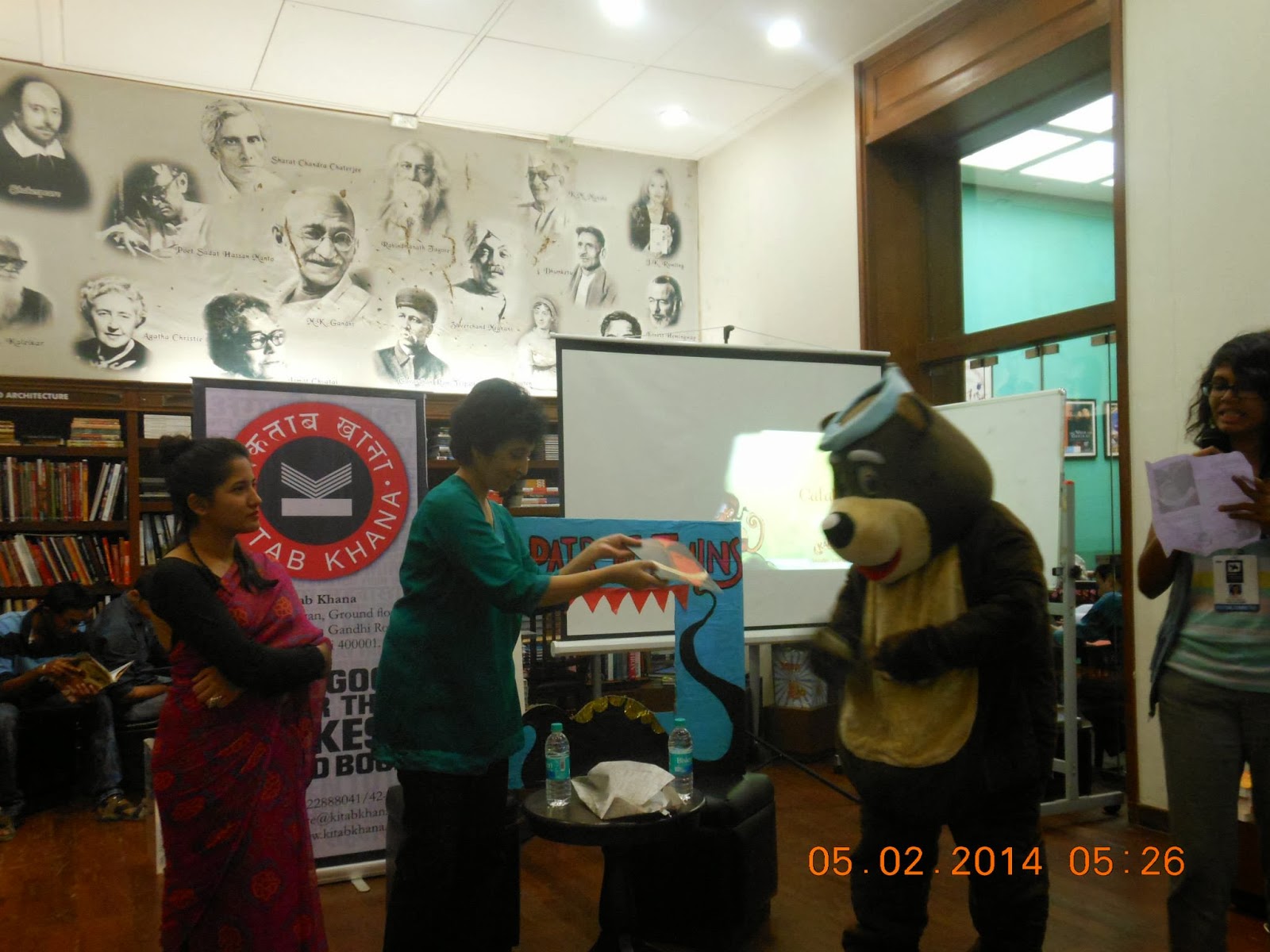 It was over before I realised it. And then the kids eagerly trooped on stage to ‘dress up’ for pictures. Most girls wore Sundari’s plaits. One girl chose to be Lakshmi, the elephant…we even had a drummer boy playing Vikram. After a long, long photo session, Nayantara gave away the props to the kids. 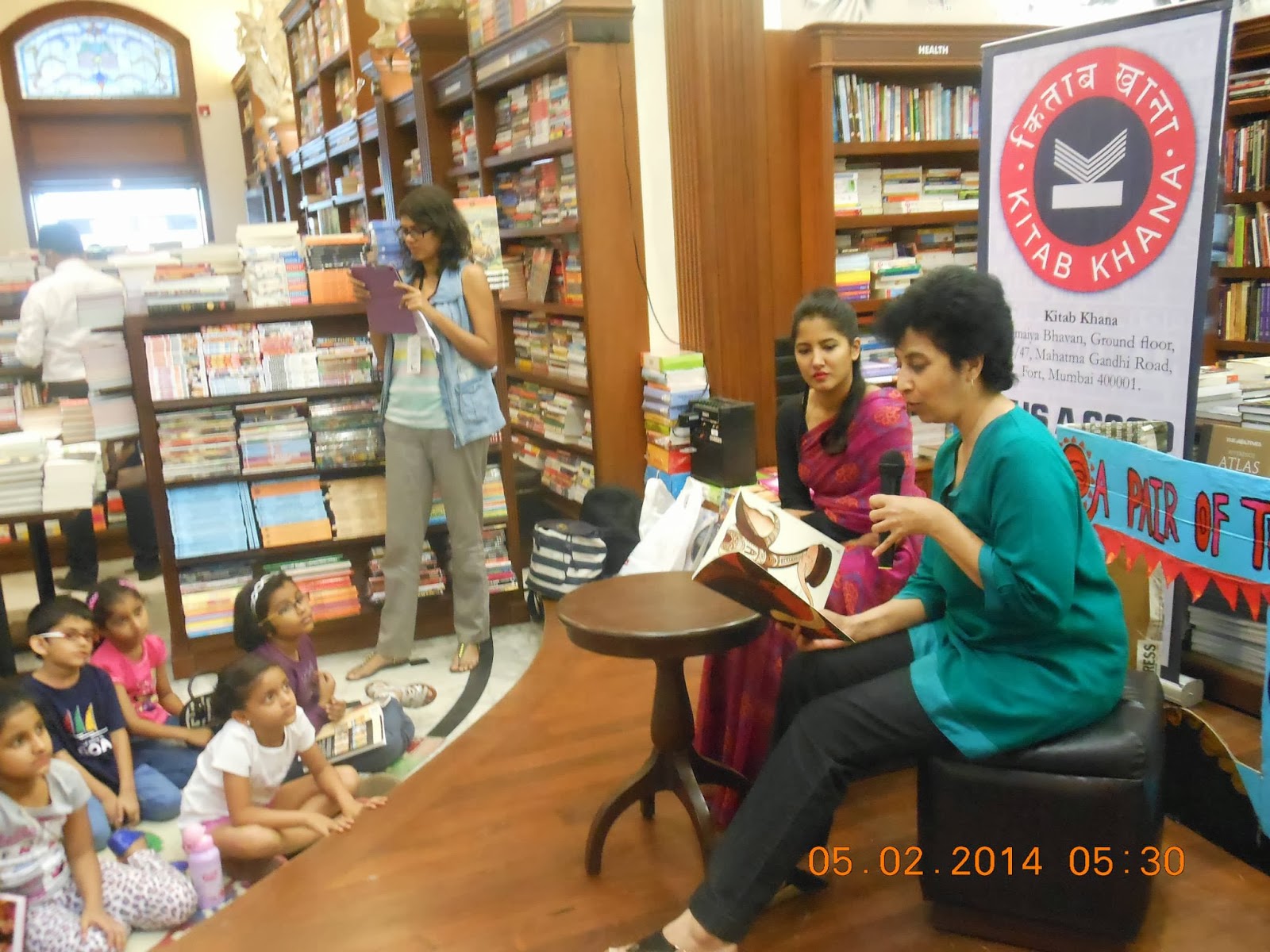 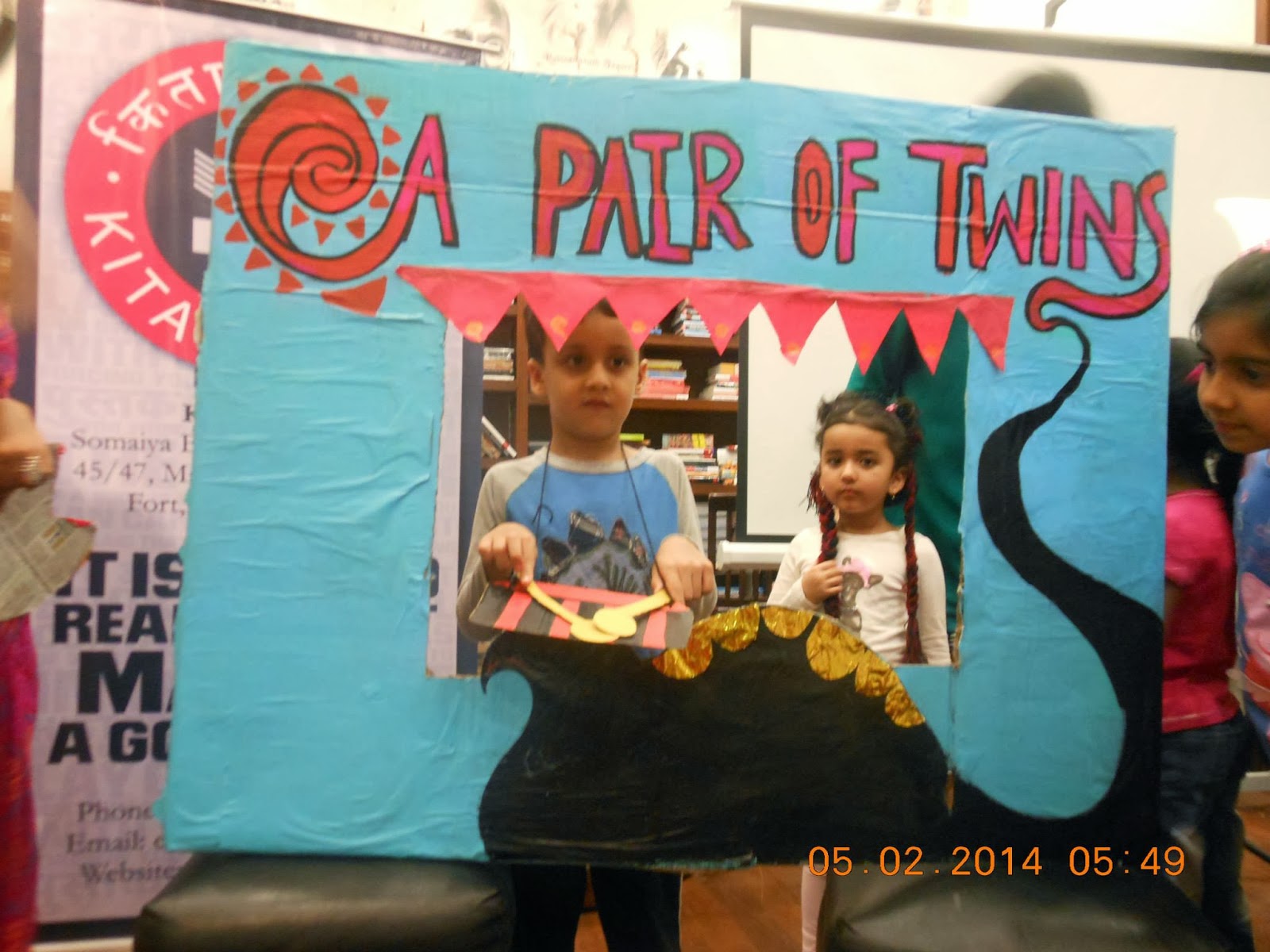 There were some great interactions with parents. I was surprised with how the story resonated with mothers of boys. The next day, at a school session organised by Kala Ghoda, I walked into a room full of about 30 boys and just a handful of girls. For a moment, I wondered how this story with two determined heroines would go down with this kind of audience. But the boys loved it – identifying completely with Sundari, and the idea of chasing your dreams. I came away from that classroom in feeling wonderful!

Thanks for this lovely write-up about the event, Kavitha!
Written by Karadi Tales 3 comments:

Judith Clay, the author and illustrator of Thea's Tree, wrote a beautiful note about herself and her love for children's books for our blog and it made our Monday morning.
I was born and raised in a small town in northern Bavaria, Germany, where my childhood was filled with climbing trees, building hideaways in the forest, ice skating and sledding in the winter. After high school, I completed a three year apprenticeship for ceramic painters. Later I earned a Bachelor of Arts degree in comparative literature in the United States, combining my passion for visual art with my interest in literature.
Besides spending time outside as a child, I loved hiding in places, reading books and studying the illustrations that went along with the stories. That was the time when I first picked up my pencil and started drawing my own pictures.Creating art, to me, is synonymous to creating my own worlds, my own stories, and staying connected to my inner child. And that is the reason why, I think, I love illustrating for children. I need that sense of freedom and magic that working for children gives me. It allows me to suspend reality for a while so my characters can fly across the sky on the backs of seahorses,or sail through space on imaginary planet ships. 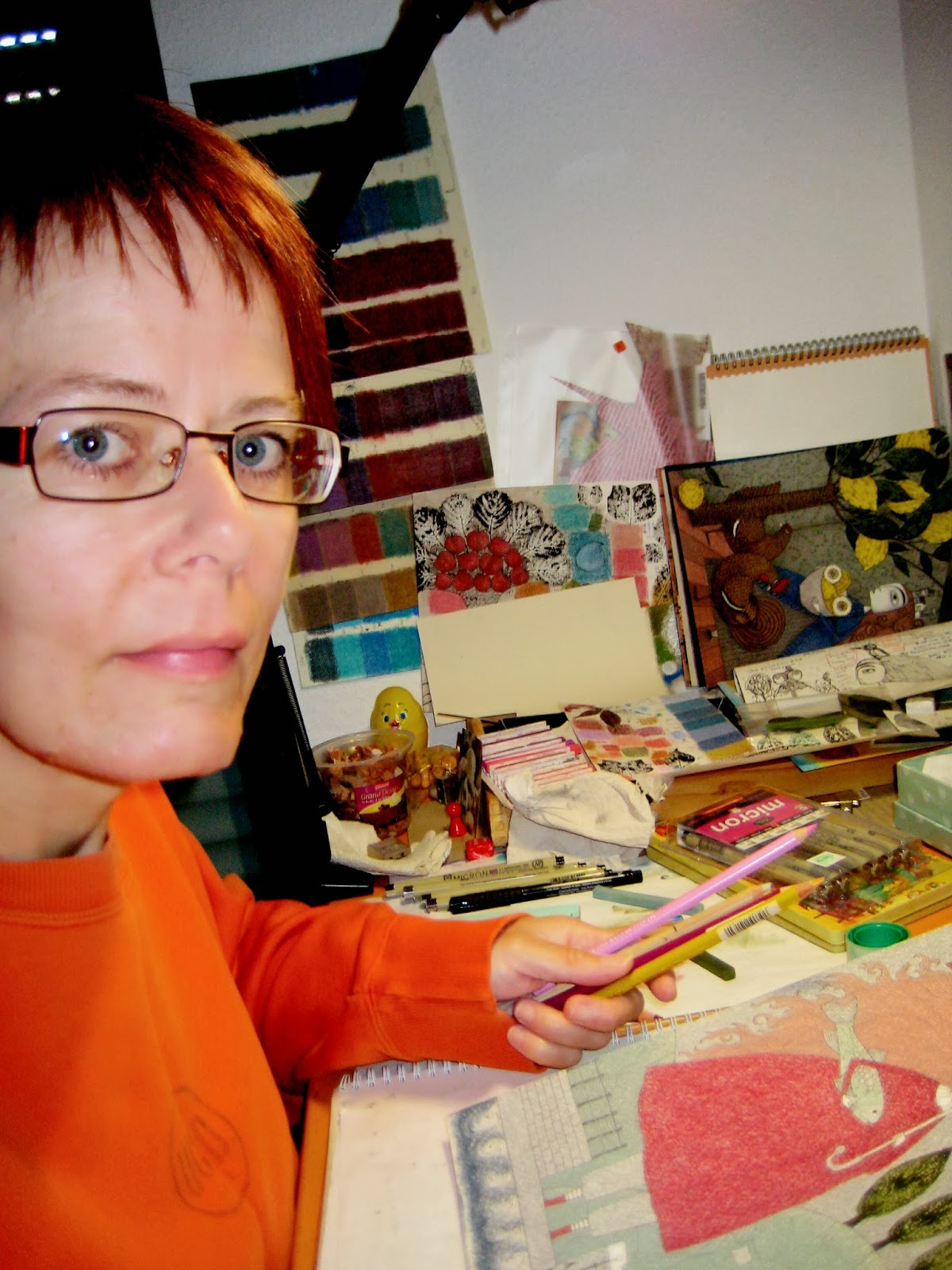 I still enjoy reading children’s stories and fairy tales, and I collect picture books and old toys, all of which give me inspiration for my artwork. Whenever we travel to places (which is another favorite pastime—travelling), I first look for bookstores, and then the children’s picture book section in that bookstore. That is the reason why a lot of my souvenirs are illustrated children’s books. The second thing I look for are art museums where I can easily spend hours wandering around, studying brushstrokes, color choices, compositions, and themes. Browsing through art supply stores is also a must wherever I go. There’s nothing more fun to me than discovering and trying out differently textured drawing or watercolor paper, or a new shade of green or red, purple or yellow.
Judith is currently working on illustrations for her exhibition and is contributing three drawings to a group exhibit of international artists in Hamburg in May.
Thea's Tree, which was listed in The White Ravens 2012 catalog of notable and remarkable international children’s books, is available for purchase here.
Written by Karadi Tales No comments: