Are you going to Kala Ghoda?

The Kala Ghoda Arts Festival begins in Mumbai today! Guess who is going to be there? 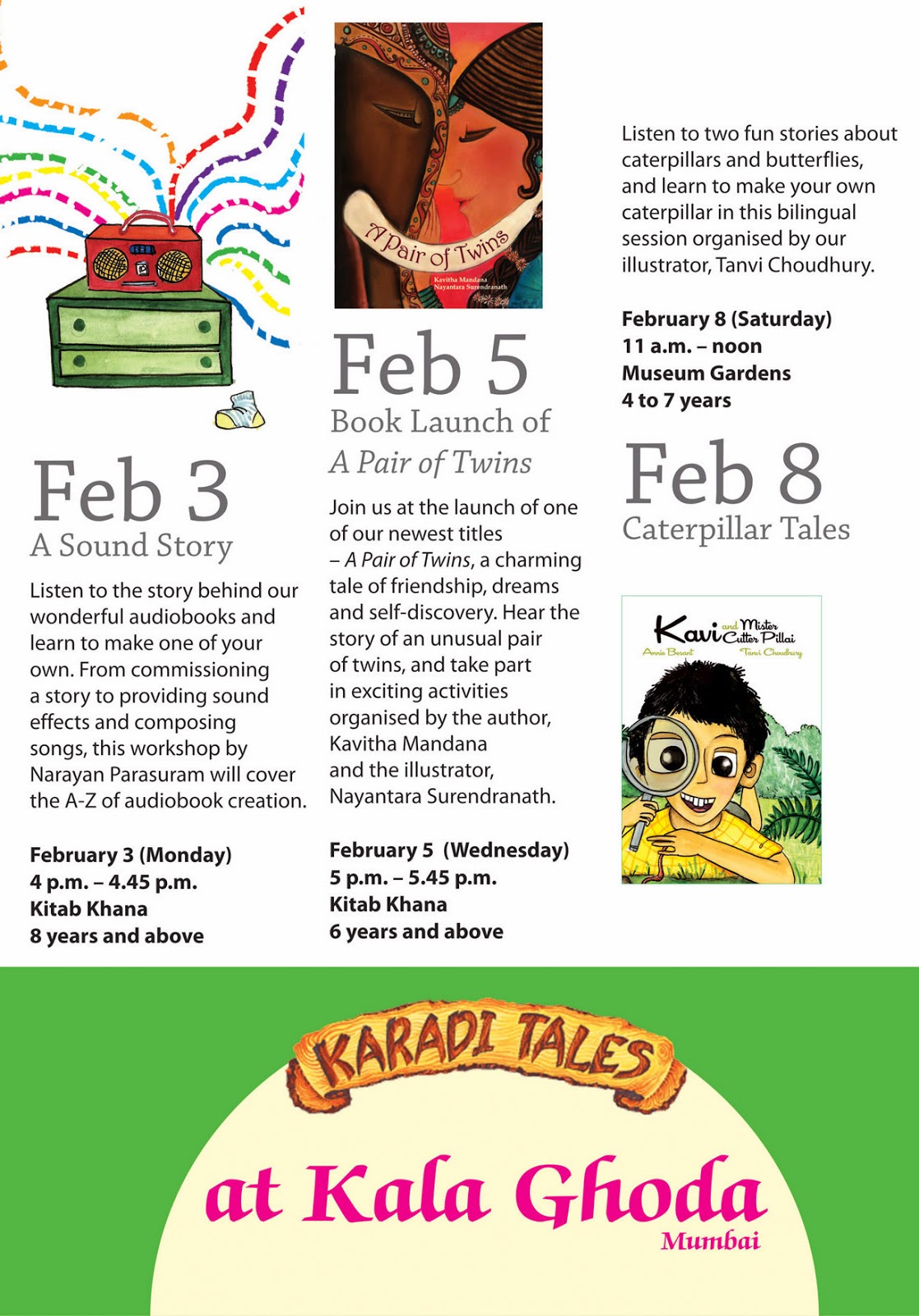 Karadi interviews Devika Rangachari, the author of A Hundred Cartloads. Devika Rangachari has won 19 national awards in children's writing competitions. Her book, Growing Up was on the Honour List of the International Board on Books for Young People (IBBY) in 2002. Devika helps to run the Children’s Book Forum at the India Habitat Centre, New Delhi, and conducts creative writing workshops for children. She has also done her doctorate in Indian history and is currently engaged in post-doctoral research. 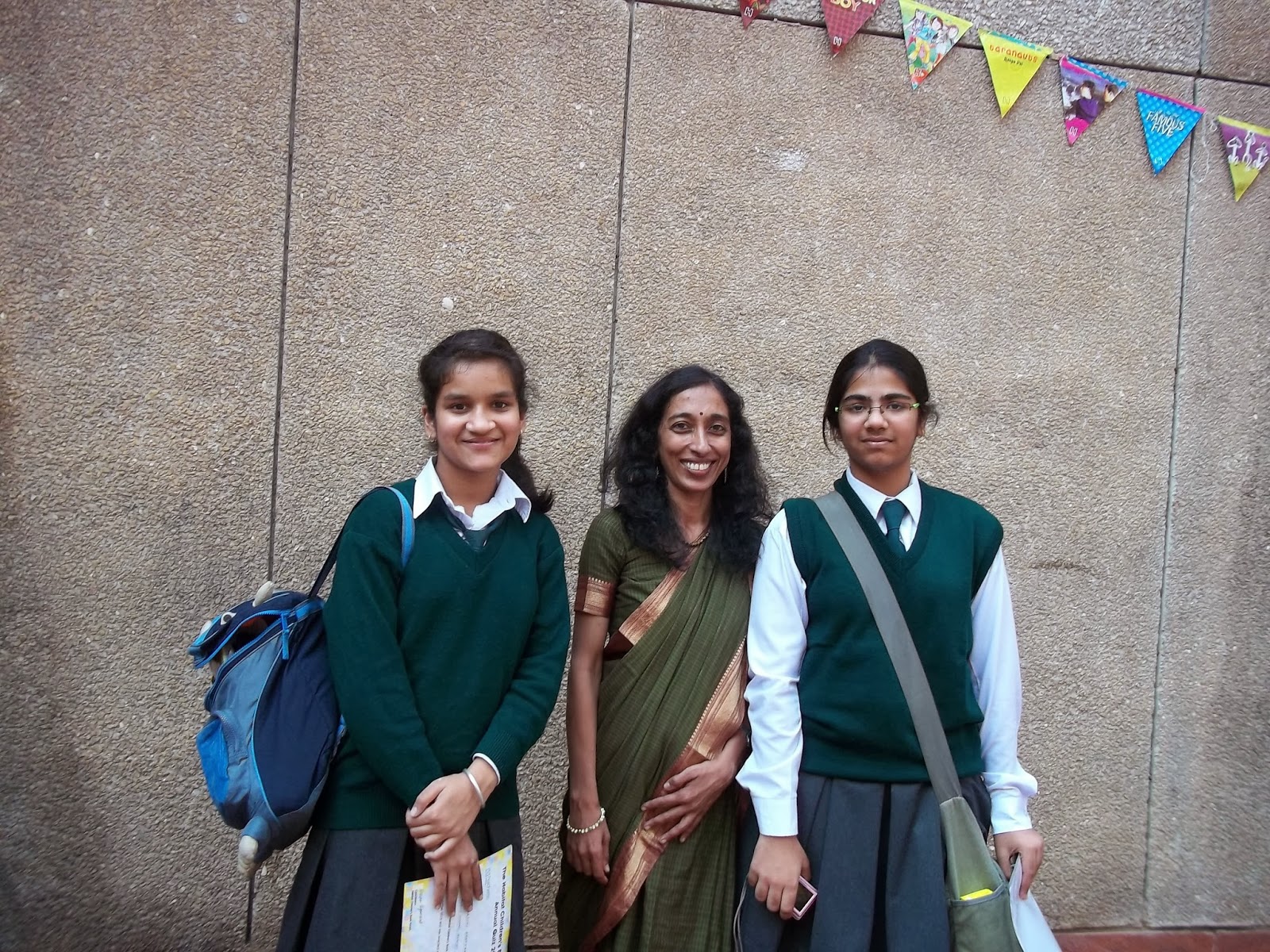 Karadi: What made you take up children's writing? What are the advantages and disadvantages of being a children's writer?
Devika: I was a voracious reader all through my childhood and adolescence (and even now!) and so, writing was a natural career choice for me. The advantages of being a children’s writer, as far as I’m concerned, is that you get to communicate your stories and, through them, your feelings, emotions and experiences to an extremely vibrant, intelligent and discerning audience. There aren’t any real disadvantages unless you consider the financial angle in that children’s writers are not always millionaires like J.K. Rowling!

Karadi: Do you have to like children to be a good children’s author?
Devika: A children’s writer need not necessarily like children but must have empathy and understanding towards them and their lives/ circumstances. She cannot write at them but for them and the difference comes about only by putting oneself in their shoes and looking at life through their eyes. I, for instance, have a very vivid memory of my schooldays, and my likes and dislikes at that stage and so, I write for and enjoy interacting with my target audience (largely 10-12 year-olds) because I empathise with and relate to them and their problems.

Karadi: What do you like to read? What are your favourite children’s books? Who are your favourite authors?
Devika: I like reading fiction of all kinds, particularly historical fiction. I don’t like reading science fiction or ghost stories—the former because I was always hopeless at science and the latter because I have an overactive imagination and don’t want to get scared out of my wits by the stories I read. My favourite children’s books were (and are!) those written by Enid Blyton and Elinor M. Brent-Dyer—basically anything to do with school and the realities of growing up. I also loved books by Jean Plaidy (historical fiction), Georgette Heyer (Regency romances) and Mary Stewart (romance/ adventure) in my later years in school.
Karadi: Do you follow a writing routine? How do you go about writing a story?
Devika: I don’t really have a fixed writing routine but work on my stories as and when ideas strike me. If I’m writing a historical story, I read through all the facts and then work on a basic framework in my mind before actually getting down to write. If it’s a realistic story, I think back to when I was in school at the particular age I’m talking about and let my memories guide me towards writing the story. I am also a historian (I am currently doing my post-doctoral research in history) and ideas for stories regularly strike me while I am looking through details of the past.

Karadi: What are you currently working on?
I am working on two books at the moment—one is a collection of love stories from history and legends, and the other is a work of historical fiction on a Kashmiri queen. Both are for the 12-14 age group.
Written by Karadi Tales No comments:

The Story of the Bak-Bak Tree

The grand tour of our very first theatrical production - Karadi Rhymes - Once Upon A Bak-Bak Tree - came to an end on January 14 and oh, what a ride it was! Four months of conceptualisation and production. Three months of touring. Four cities. And seven houseful shows. We could not have asked for a better response from our fans in Chennai, Coimbatore, Cochin and Bangalore!

In July 2013, when we approached Evam Entertainment with the idea of a play based on our much-loved Karadi Rhymes, they lapped it up straight away. In order to build a narrative around the rhymes, they read all our picturebooks and listened to all our audiobooks and a month later, we had a team of four playwrights - internet celebrity The Local Tea Party, stand-up comic Balakumaran, Jagadeesh Kanna and Cinthoorika Dinesh - working on the script of Once Upon A Bak-Bak Tree. Once the scripting was complete, the actor hunt began. Five actors and two musicians were shortlisted, and the rehearsals commenced in September. 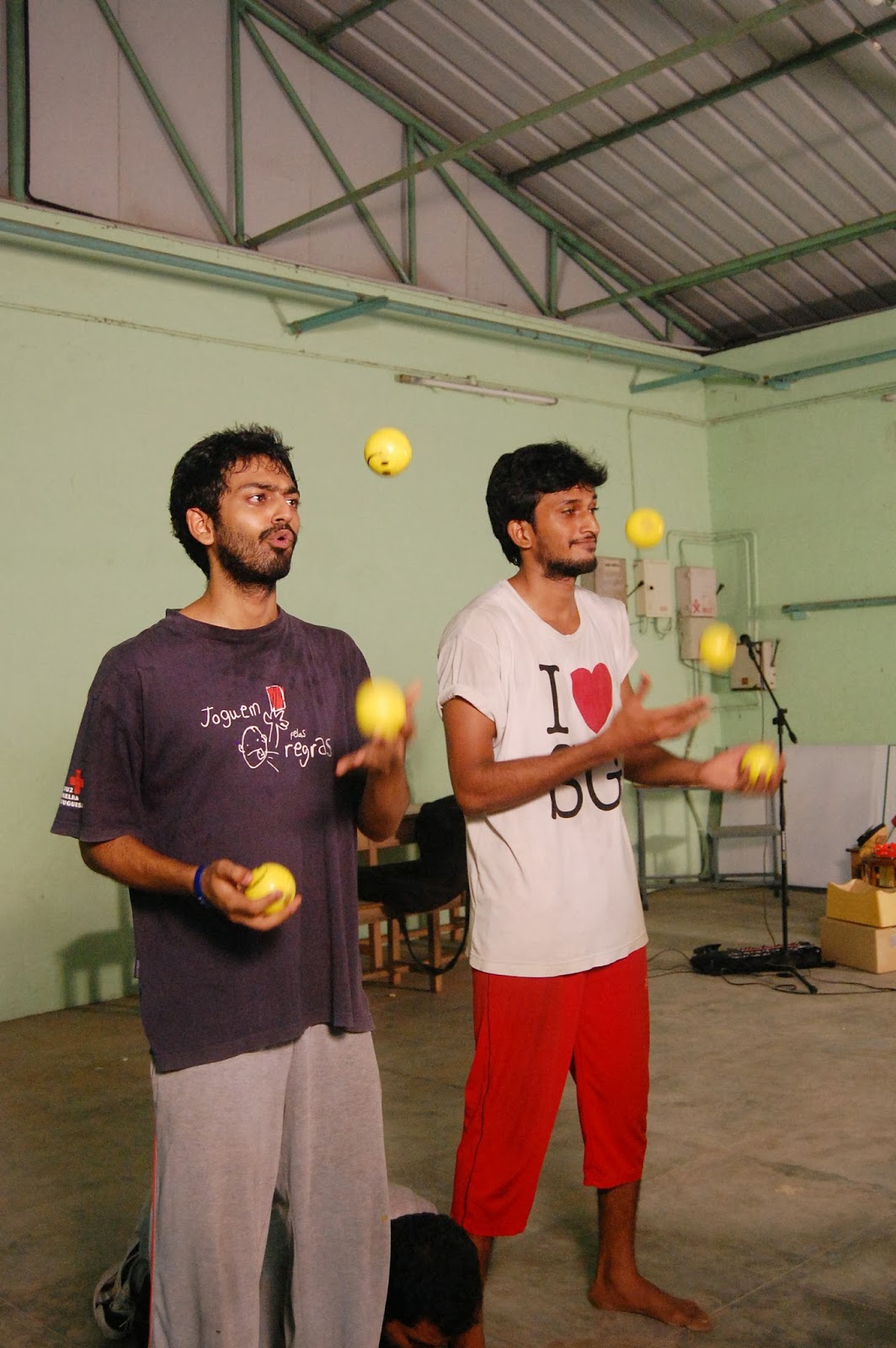 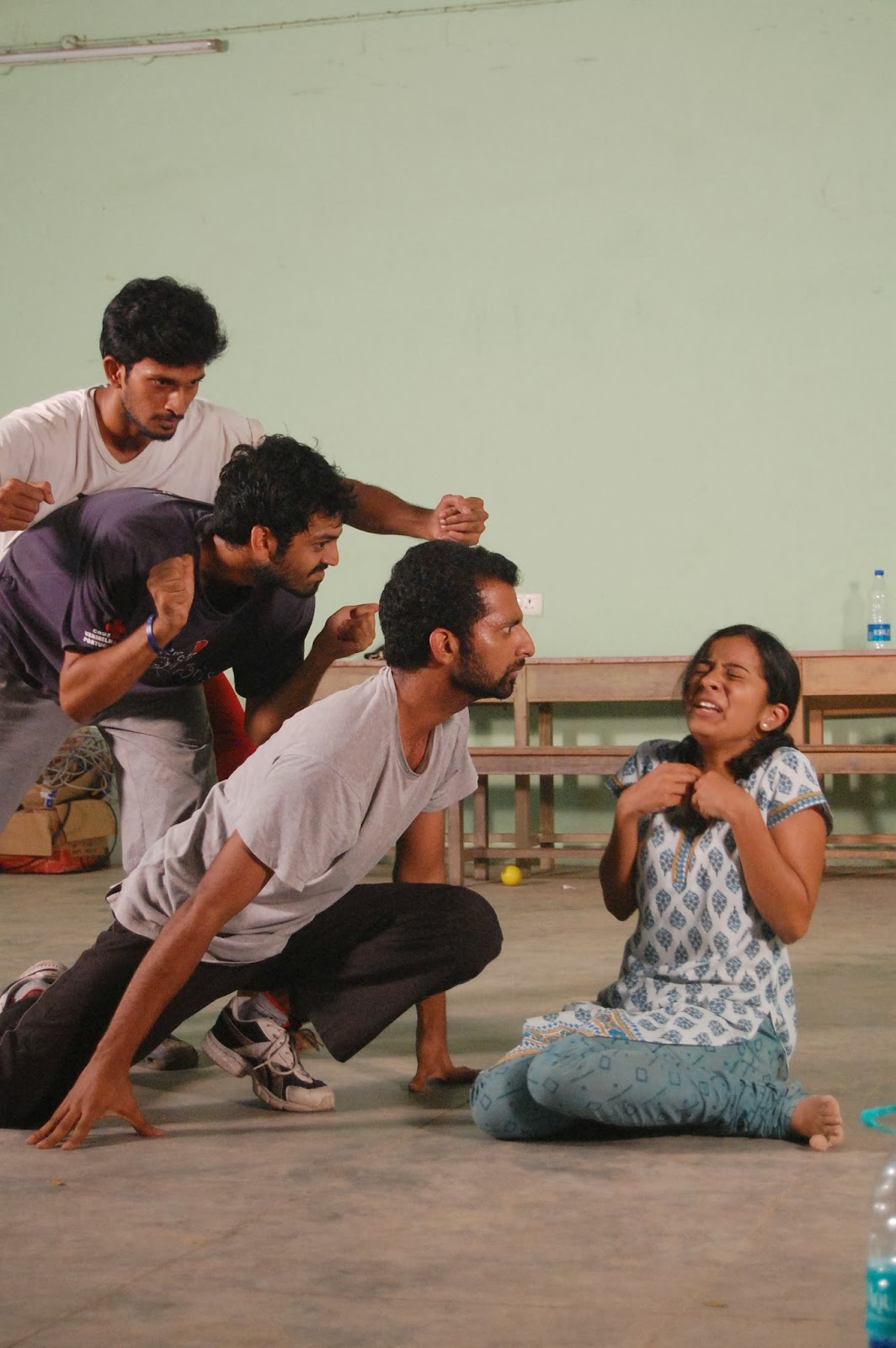 By November, Director Bhargav Ramakrishnan had put together a fabulous (if we may) production that was ready to reach out to its audience. 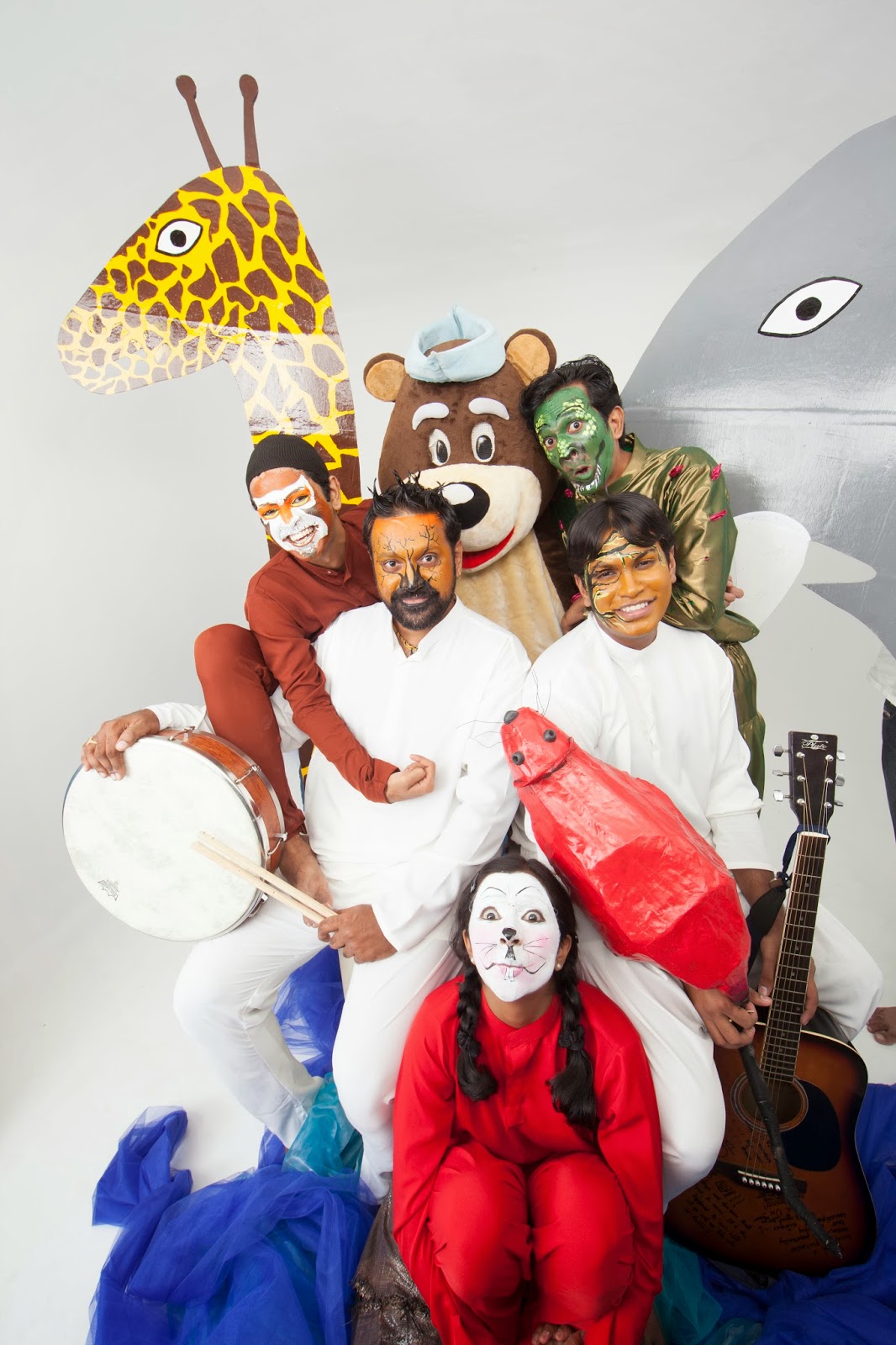 Two days prior to the premiere of Karadi Rhymes - Once Upon A Bak-Bak Tree in Chennai, all the tickets for the show were sold out. On Children's Day, the musical premiered to a packed hall. Usha Uthup, Kunyu, Loki, Shooshaa, Venky, Drums Murali and Nishant took the crowd by a storm and the show was a stupendous success. 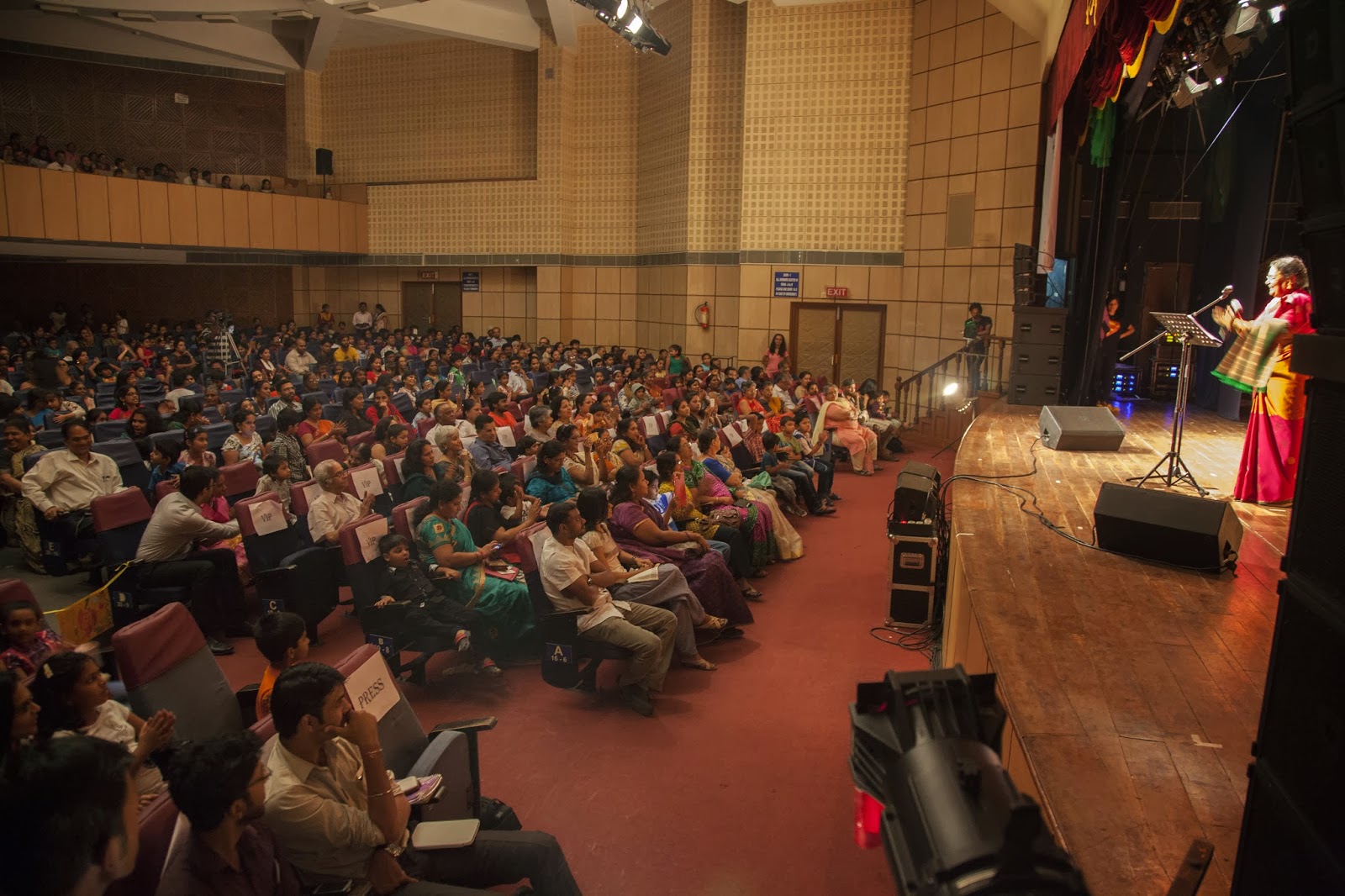 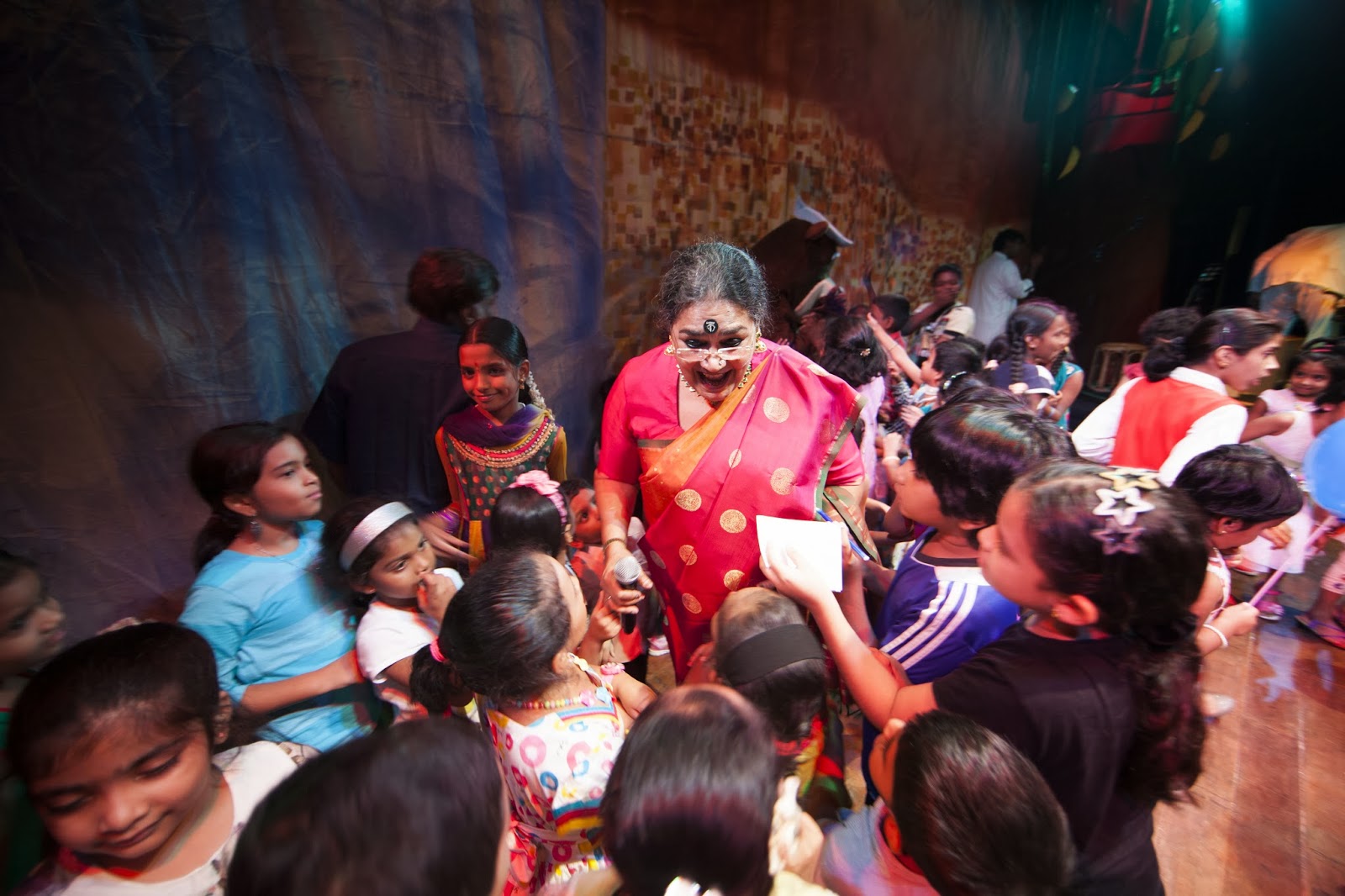 After receiving numerous rave reviews, we proceeded to Coimbatore in December only to witness yet another packed hall and earn more marvellous reviews. 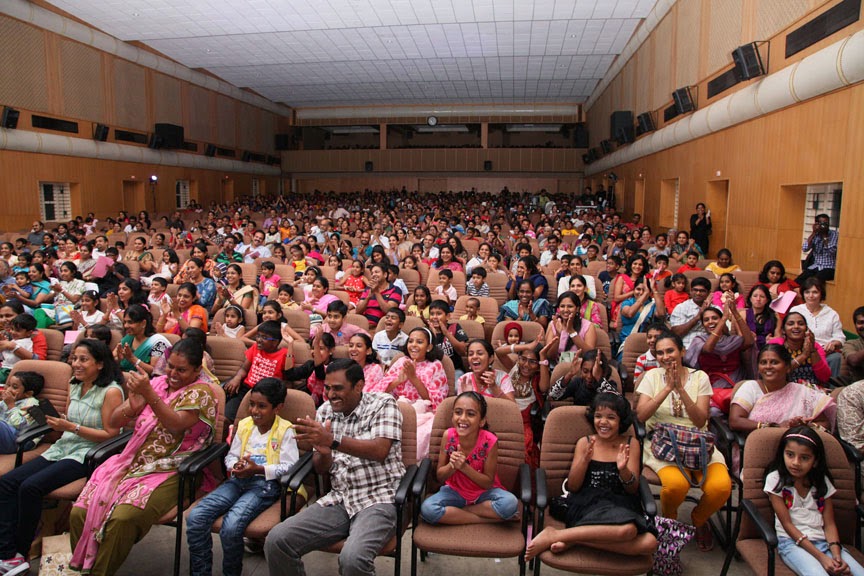 The same month, we travelled to Cochin and Bangalore, with the popular playback singer Anooradha Sriram performing in place of Usha Uthup. In Bangalore, due to an overwhelming response we had two shows on the same day. Everywhere we went, we continued to earn praises. 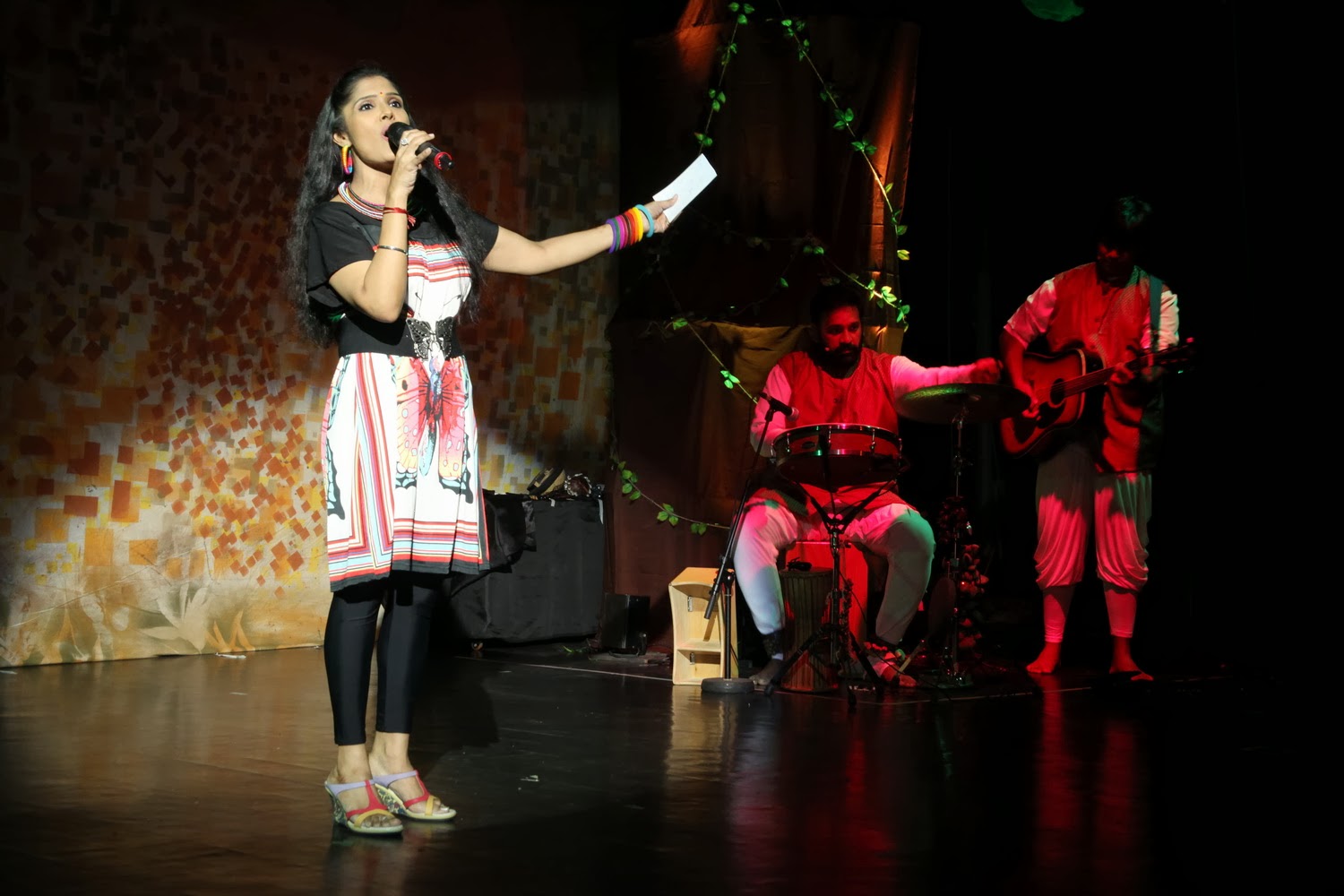 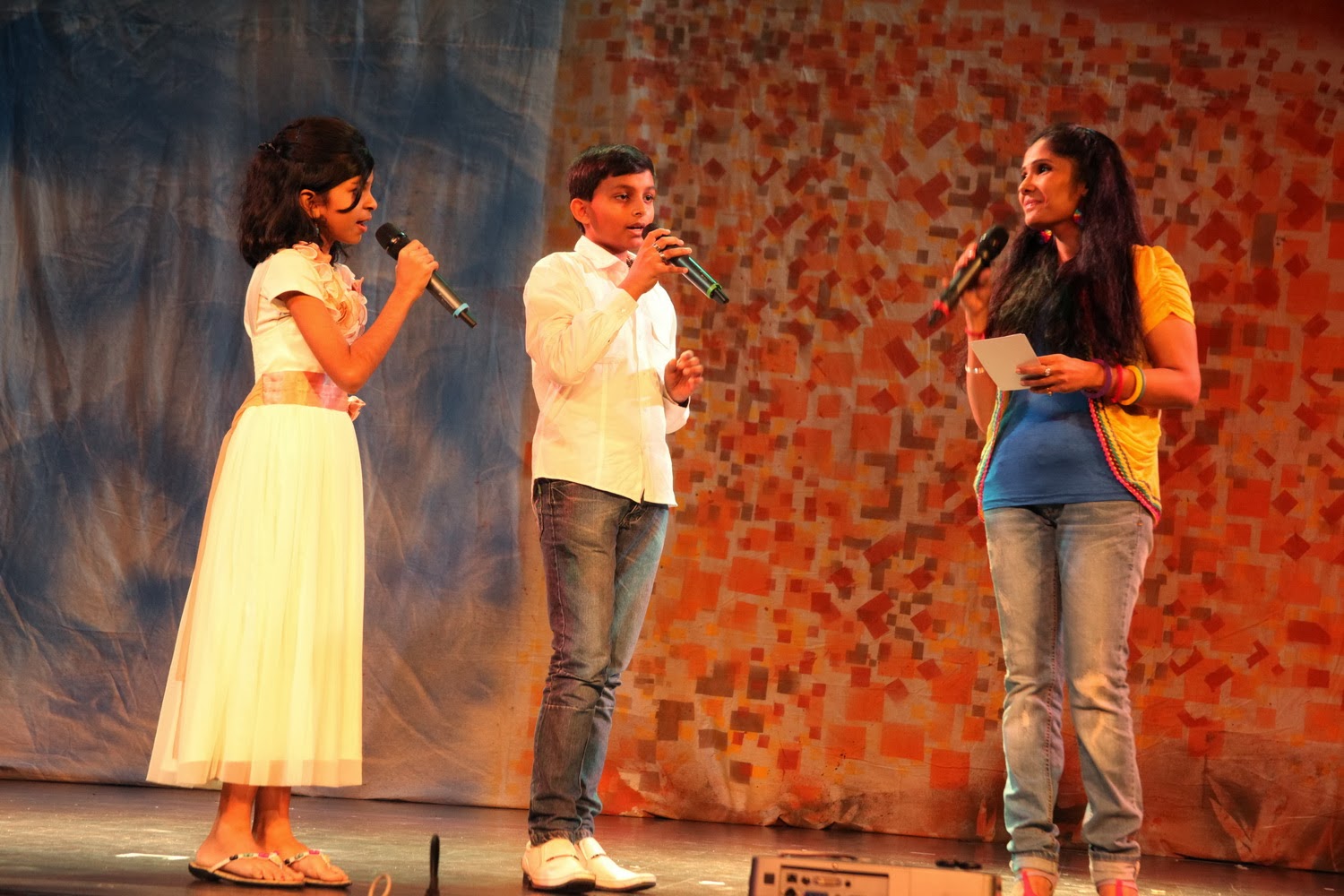 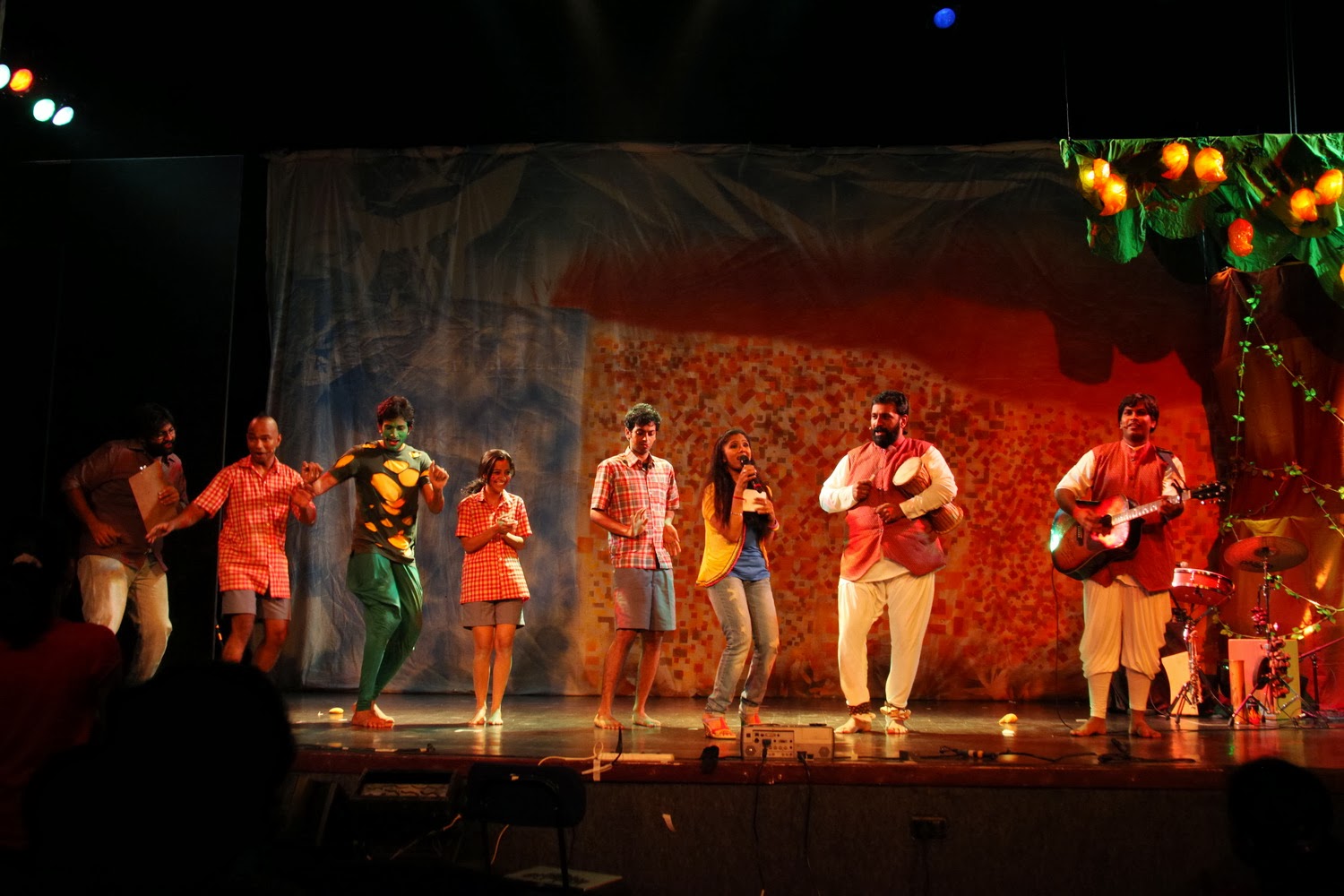 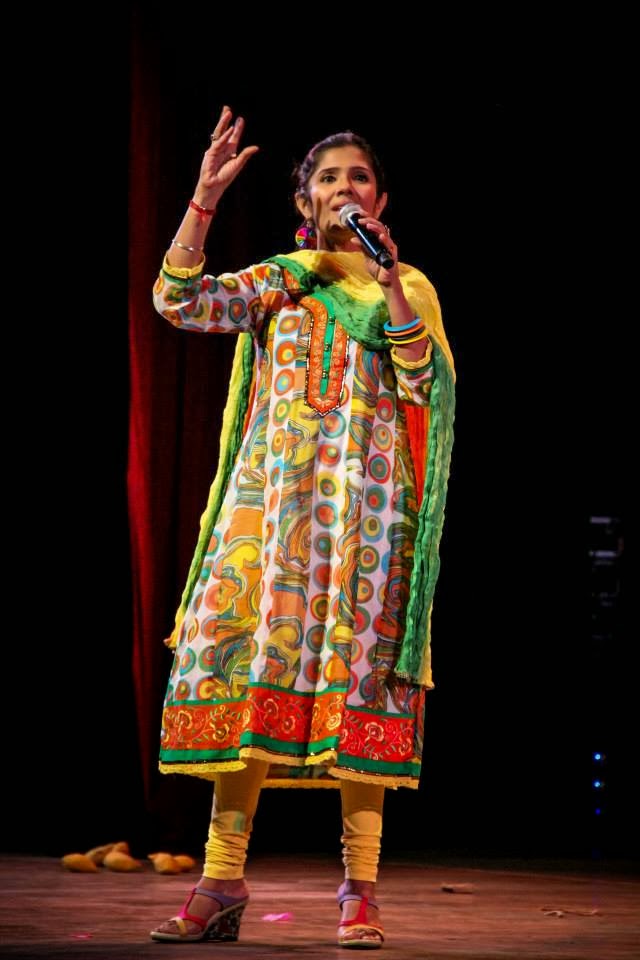 On popular demand, Bak-Bak Tree returned to Chennai on January 14 and the city folk were treated to two shows in the same evening. For one last time this season, Usha aunty, Shooshaa, Loki and Kunyu painted smiles on faces - both young and old. They did not bid goodbye though, for they do plan to return in September. 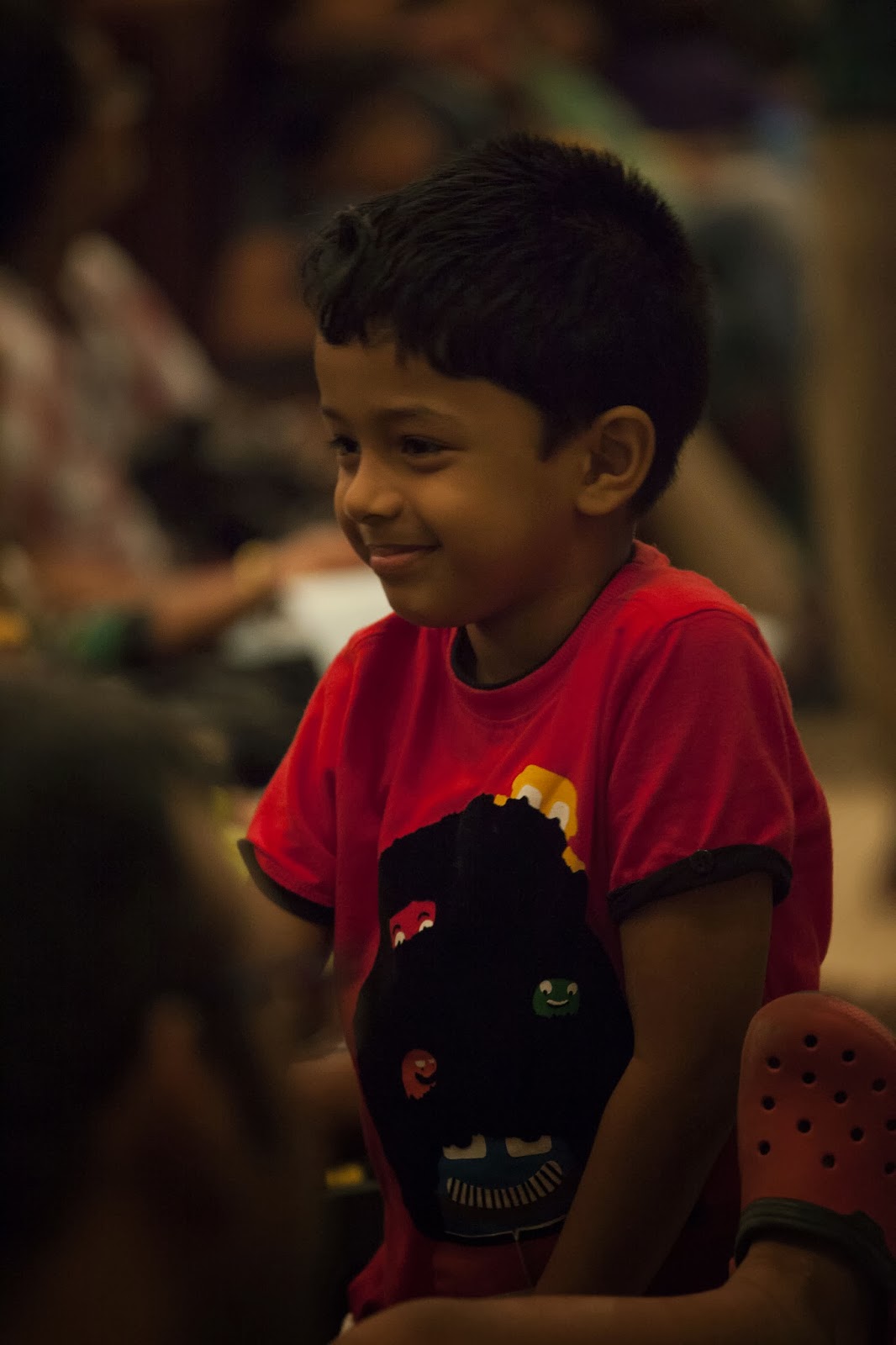 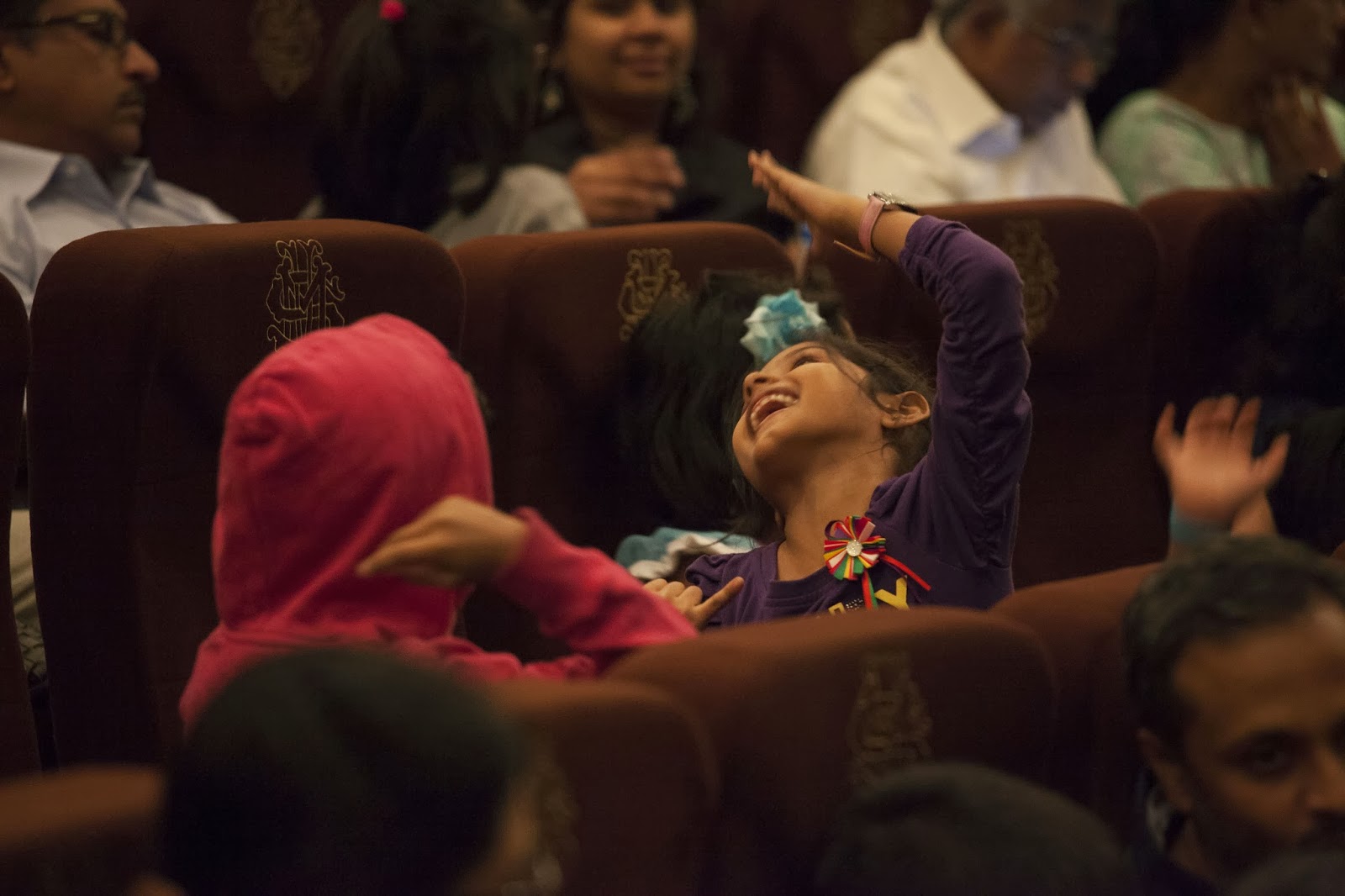 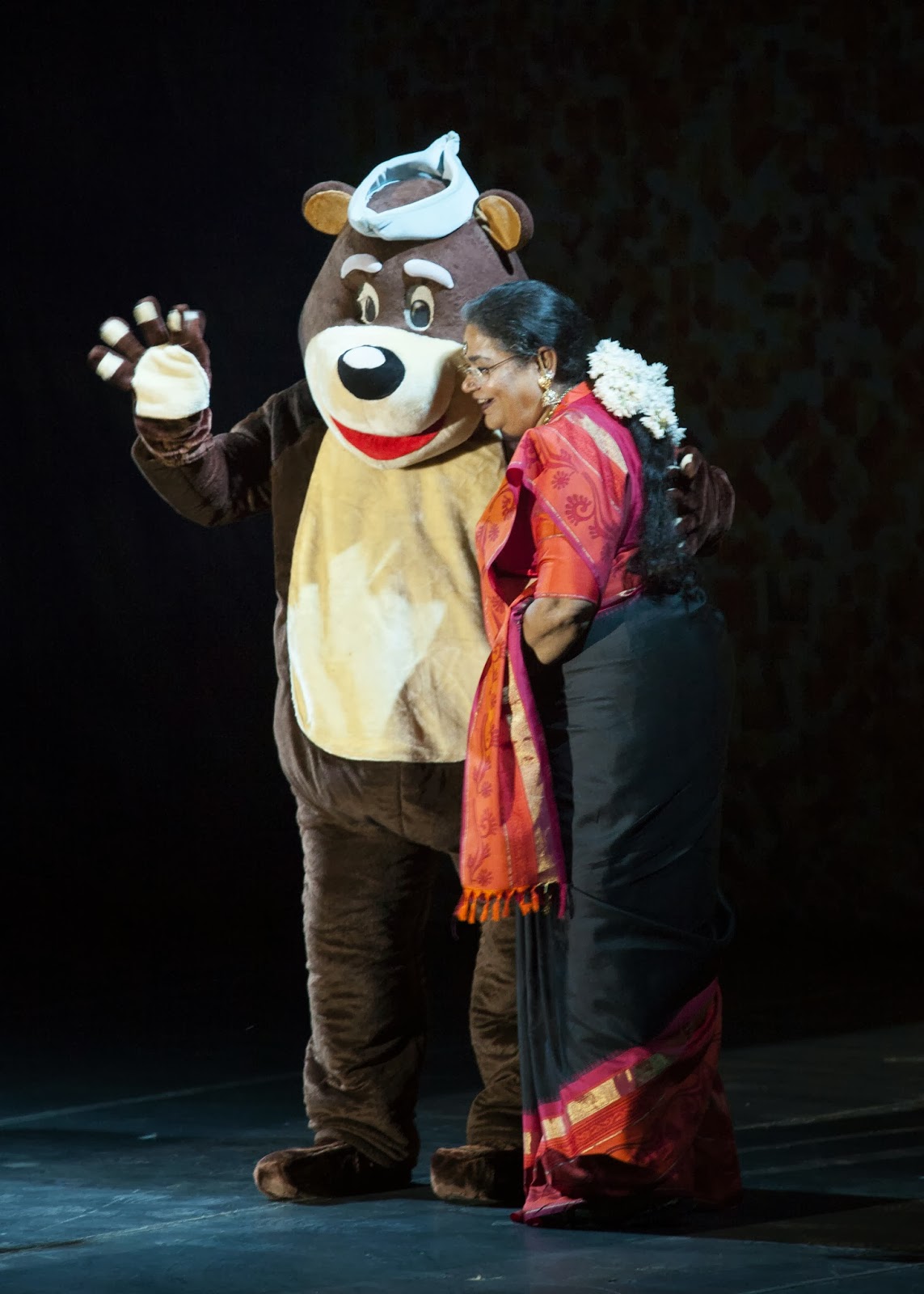 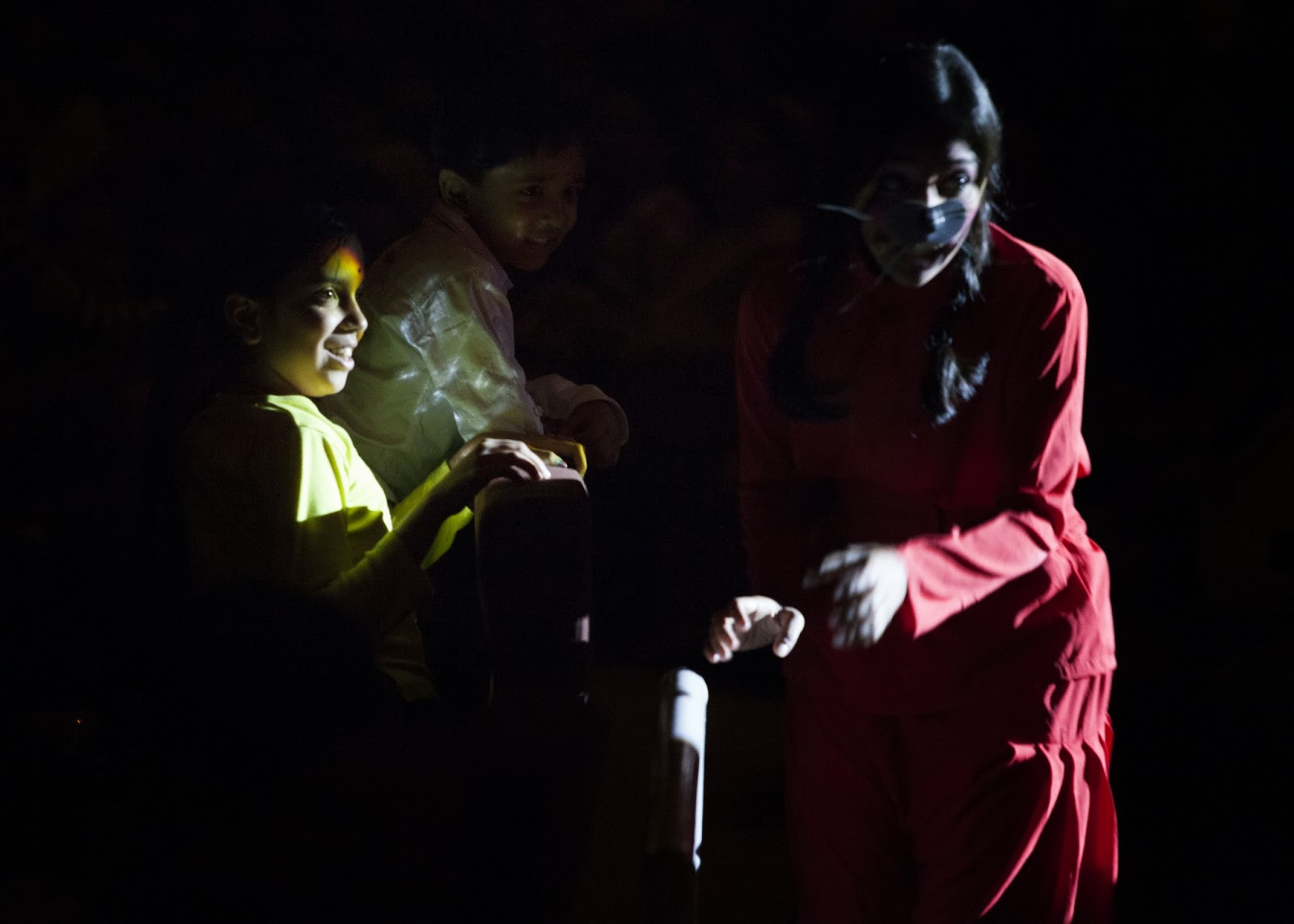 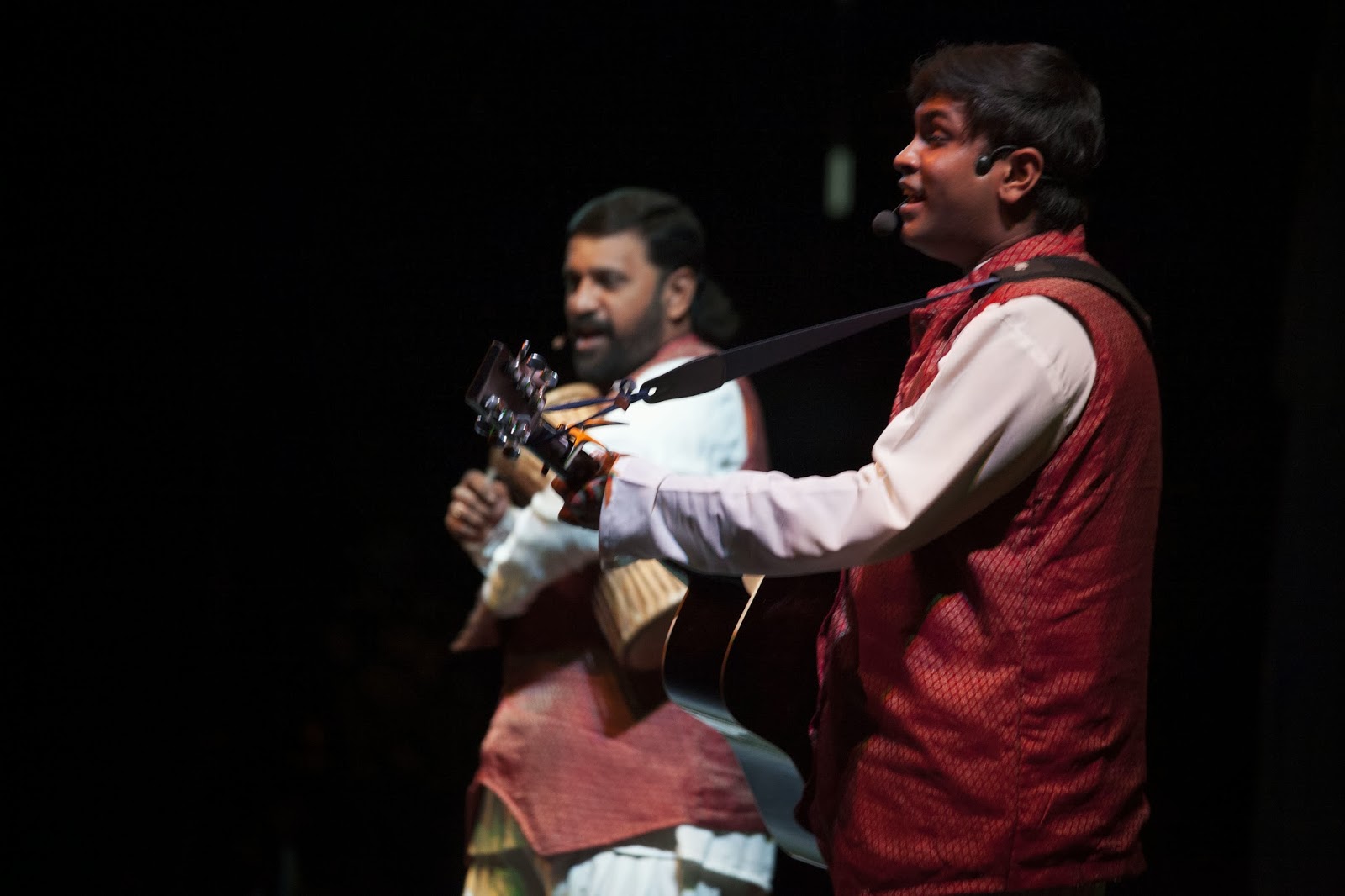 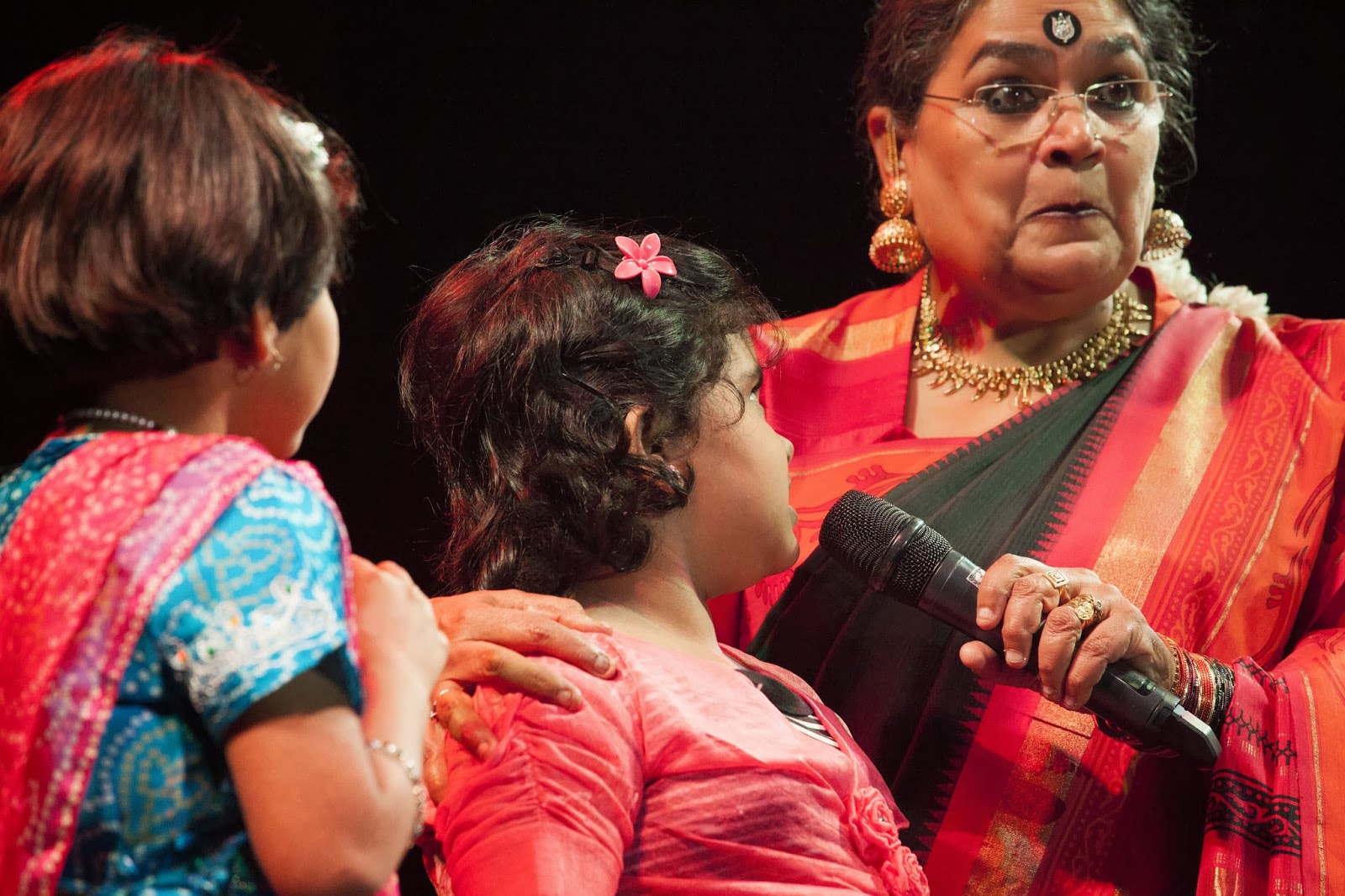 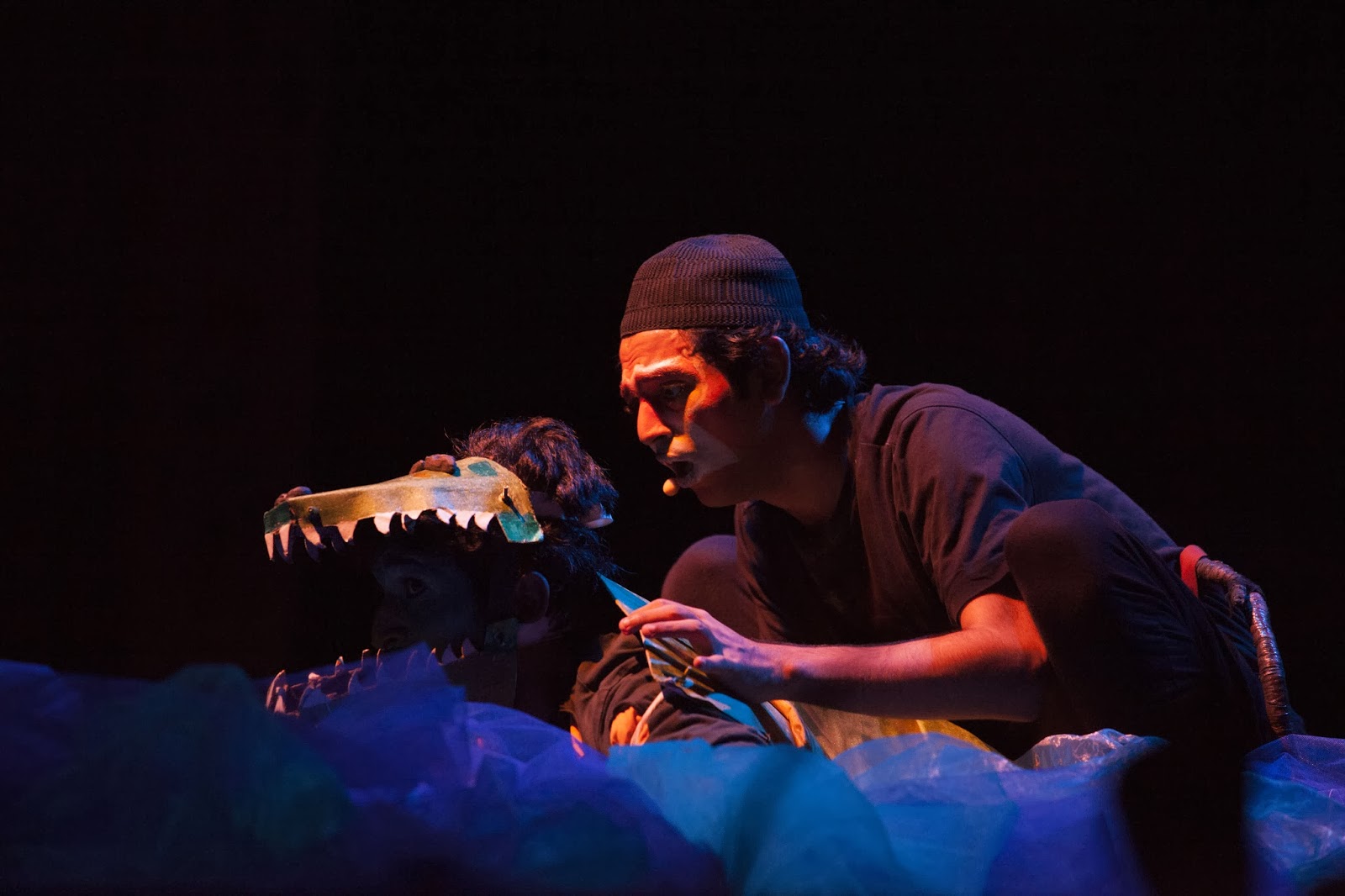 Kirkus Reviews The Fox and the Crow

"Aesop noir—gorgeous," is what Kirkus Reviews has to say about The Fox and the Crow, written by Manasi Subramaniam and illustrated by Culpeo S. Fox. Click here to read the entire review.

The Fox and the Crow is available online through our website and on Amazon.
Written by Karadi Tales 1 comment:

Email ThisBlogThis!Share to TwitterShare to FacebookShare to Pinterest
Labels: Kirkus Reviews, Reviews, The Fox and the Crow

Kirkus reviews Thea's Tree written and illustrated by Judith Clay. They write, "With its droll paintings and fablelike story, the book will appeal to those whose tree-hugging instincts and good wishes for the Earth’s future are intact." To read the entire review, visit https://www.kirkusreviews.com/book-reviews/judith-clay/theas-tree-clay/.

Thea's Tree is available online through our website and on Amazon. 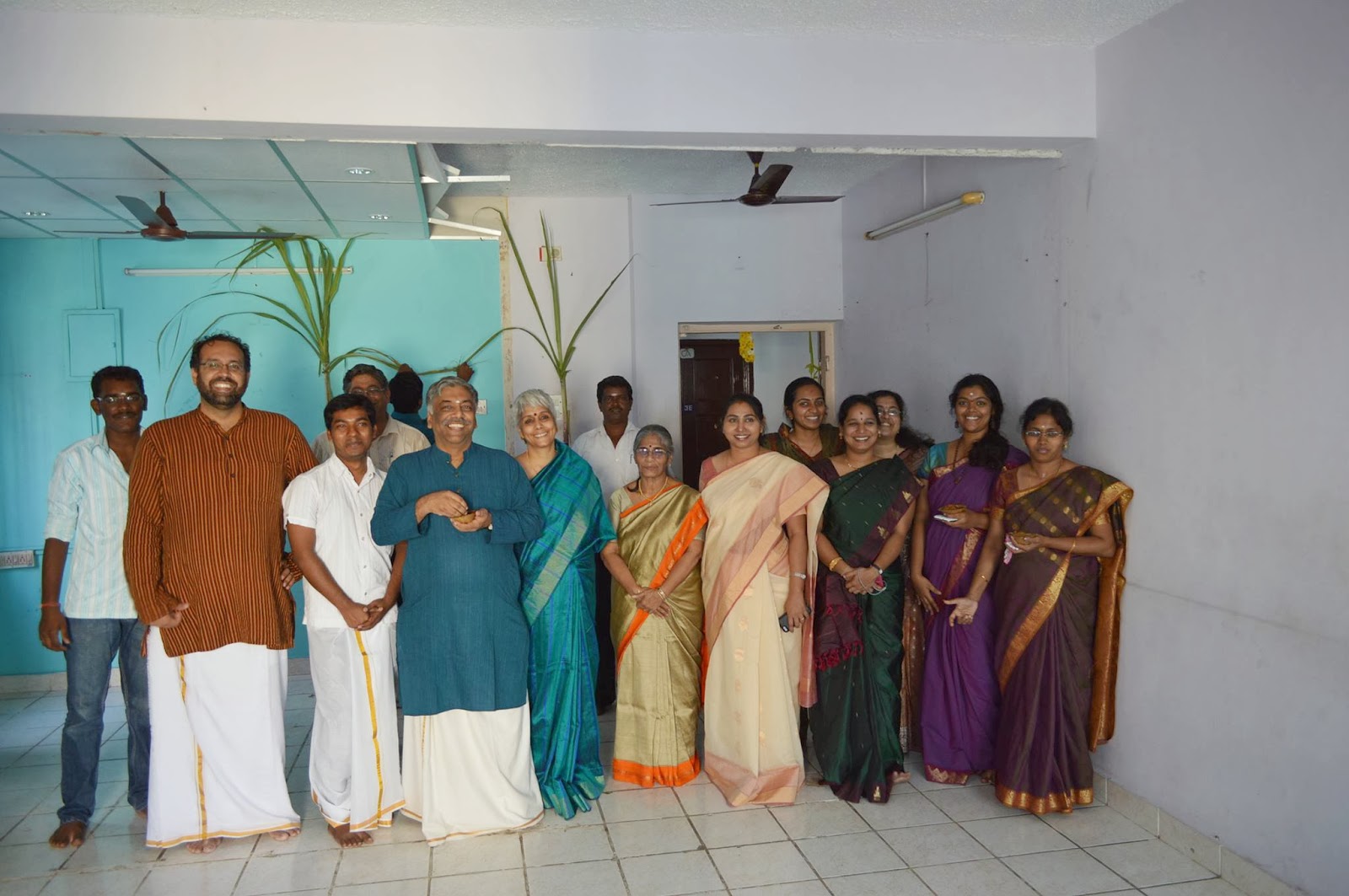 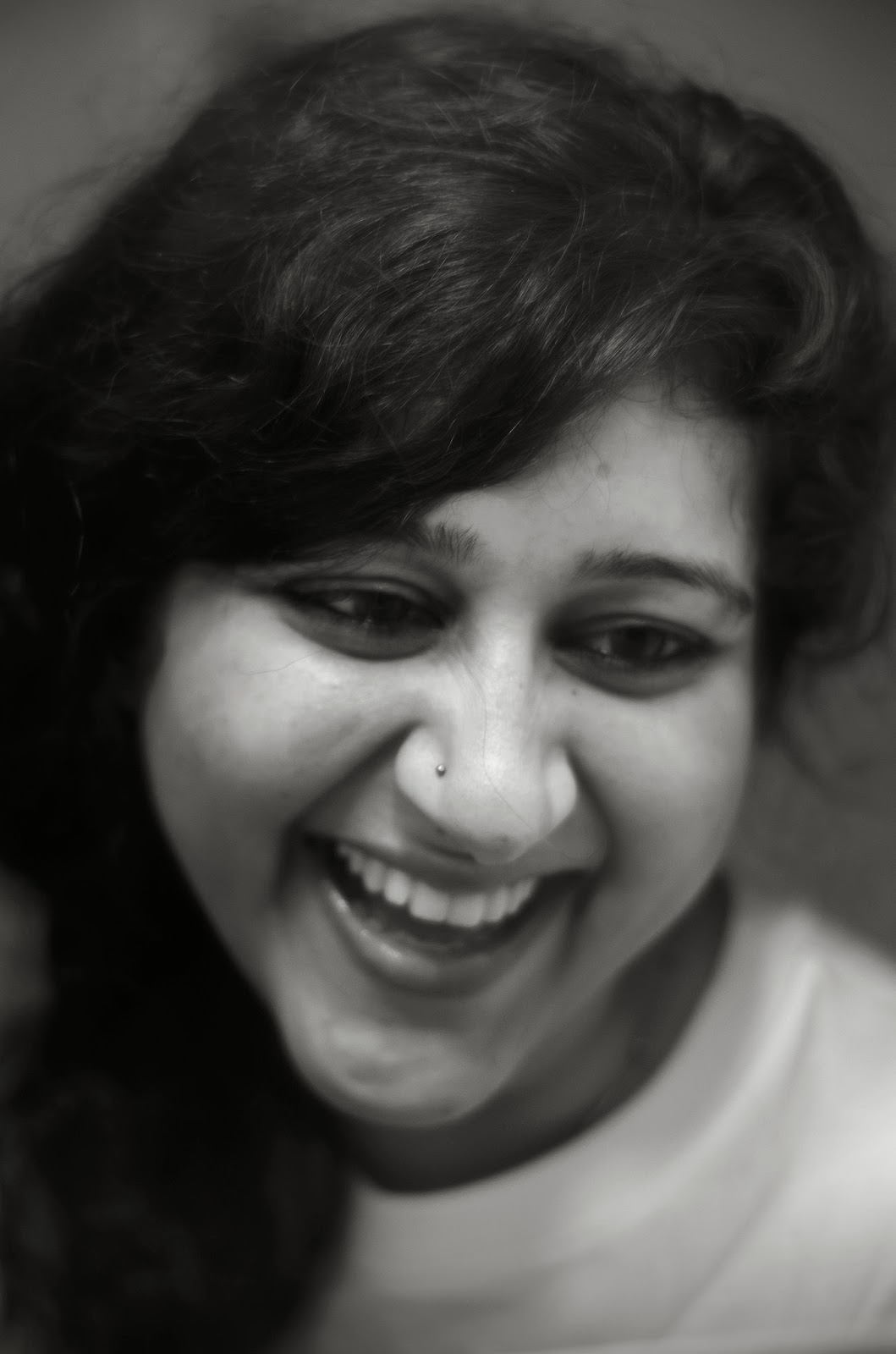 This week, we'd like you to meet Sonal Gupta, illustrator of The Wednesday Bazaar. Sonal loves experimenting with bright colours and visuals. An Animation Designer from MIT Institute of Design, she loves illustrating for children because it takes her back to being a kid. She likes to draw and paint with hands because she loves the feel of textures, paper and paints. The digital medium, according to her, is just a sophisticated tool to enhance her hand-drawn illustrations. 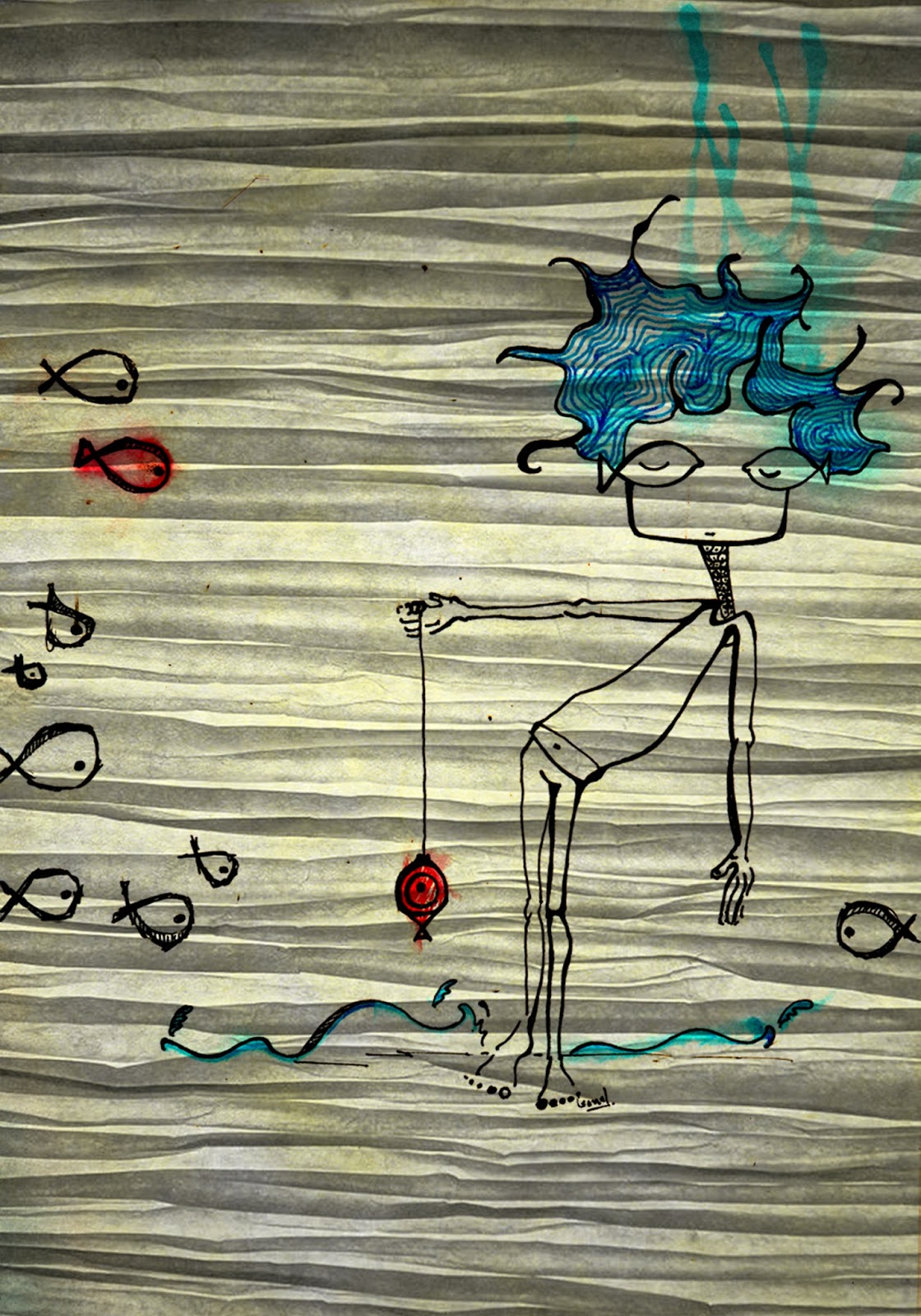 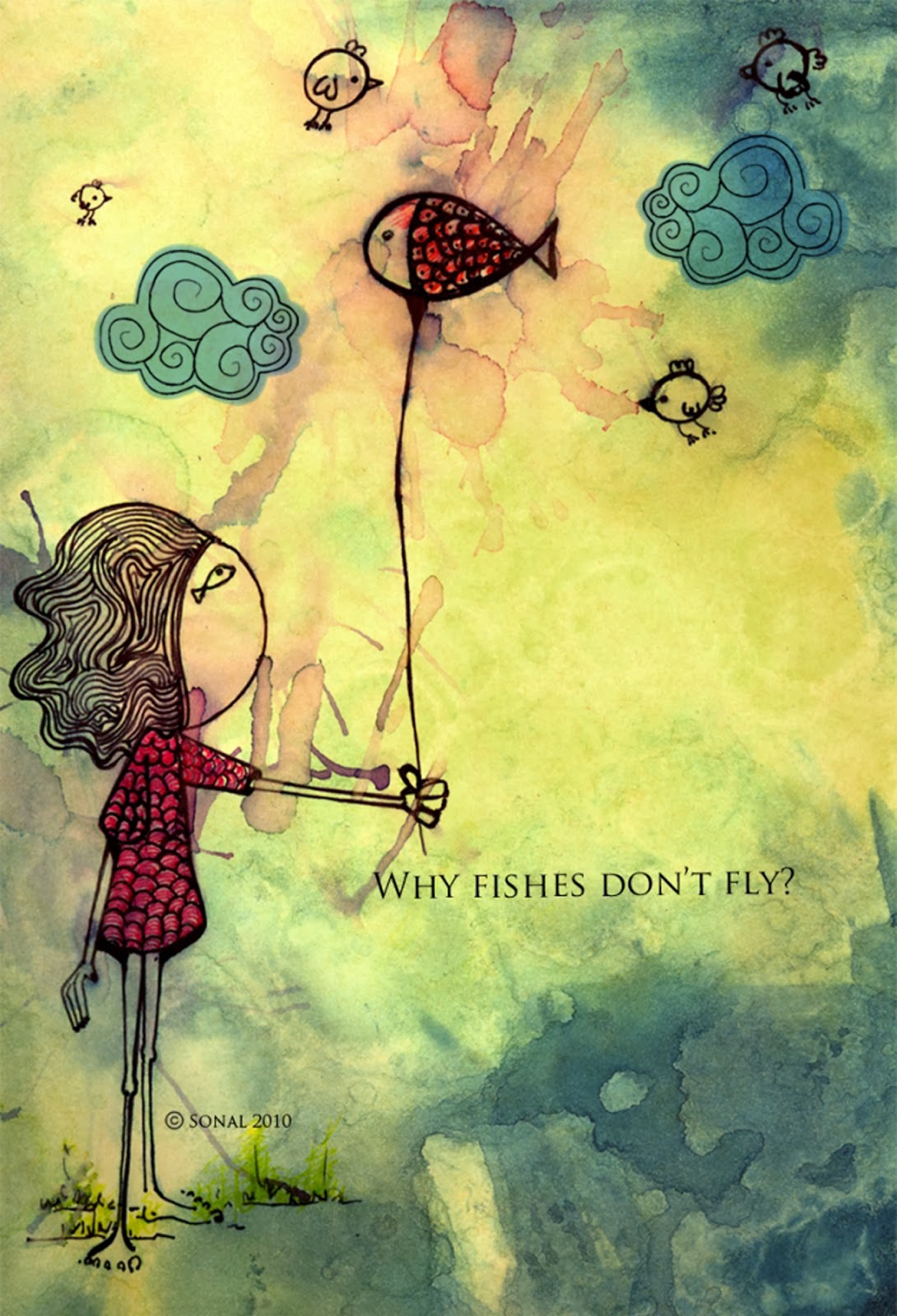 She loves stationery and collecting matchboxes. She uses the matchbox as a canvas to paint and, guess what, even her visiting card is a matchbox!

Sonal is currently working on developing educational products for children. She also conducts weekly storytelling sessions for Vidya, an organisation for educating and empowering women and children.

To have a look at what Sonal does, head to www.sonal7gupta.blogspot.com and  https://www.behance.net/sonal479.